As the attached screen shot I have one polygon layer (black) which has some missing polygons and another layer (red) which contains these polygons. Both were created from the same shapefile originally and they are multipoint polygons both CRS are set to WGS84

What I'm trying to do

First selecting everything in the complete layer (red) then;

Using Vector / Research tools / Select by location. Select all the complete layer then remove from selection based on the overlap selection. This results in some but not all.

Select all the complete layer then remove from selection based on the intersection selection. This results everything getting selected.

I was trying to find documentation on the precision function within the select by location to see if this might help. In my head overlap is the right function as i want to remove all the polygons that overlap one another which should leave just the mismatches which are my gaps. 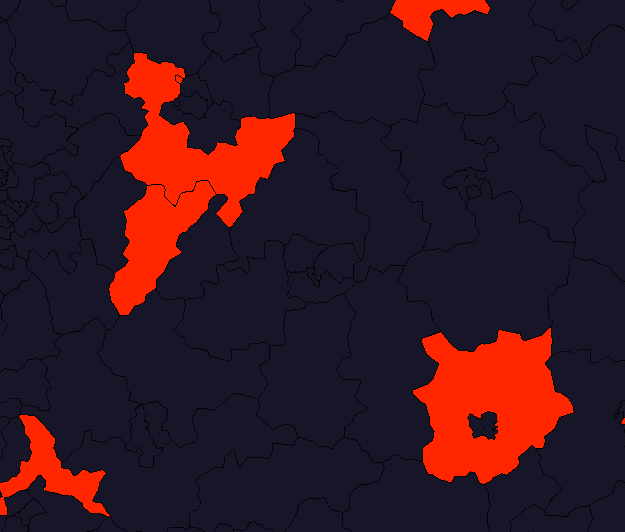 This tool takes two input layers, Layer A (your black) and Layer B (your red).
From complete Layer B, missing polygons are copied to Layer A.

Tested in QGIS 2.18.7 with SAGA 2.1.4. Please note latest QGIS and SAGA may not work well in the Processing Toolbox.

A postgis solution also exists for this question as explained here;

PostGIS: Select features that do NOT intersect

Firstly, you may try to select the features from the red layer that are equal to the black layer, and then invert the selection.

For doing this, use the Select by location algorithm with the following parameters:

Once you have done this, you can simply invert the selection from the Attribute Table.

At the same way, you can also preliminarily select all the features from the red layer and then setting removing from current selection option from the tool dialog.

51
Selecting features that do NOT intersect in PostGIS
29
Understanding Join Attributes by Location in QGIS?

2
Problem with creating a model in Qgis -- select by location
5
How to select overlapping/non-overlapping polygons from a single shapefile in QGIS?
2
How to select polygons by duplicated attribute value from a shapefile?
2
Problems with intersecting two polygons layers in QGIS
9
Select by Location and Join the Attributes of Two Line layers
2
Select By location QGIS 3.12 Not Selecting all Features within
2
Compare two layers and find the percentage of the shared areas that are different between them
3
QGIS: Select polygons from one layer which intersect/lie inside polygon from other layer?
5
Selecting only polygons that contain another polygon with Select by Location in QGIS