I'm not sure what the correct term is, but it's a common cartographic design pattern.

I want to show the outline of built-up areas as a filled polygon beneath road and buildings layers.

In OpenStreetMap, such areas are sometimes available as landuse=residential. I suspect these will all have been traced manually.

Here's an example, this is Gibraltar. I digitzed this outline manually and clipped it to the shoreline. The "urban footprint" consists of the purple/pink areas (this was extended out to sea, then clipped to the land outline from OpenStreetMapData) 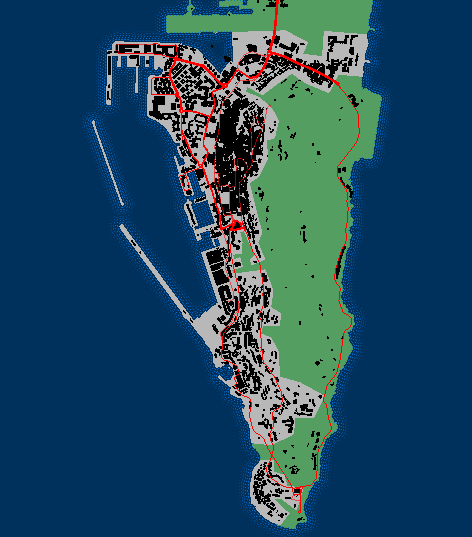 Is there a tool available in QGIS (or other FOSS GIS tools) to generate these automatically from a set of buildings?

I was able to get some quite good results, with thanks to Michael Stimson for the suggestion.

I had forgotten about the "buffer out, buffer back in" trick (this can also help reduce the number of holes that need to be fixed). This involves a positive buffer (which tends to fill in gaps and holes) followed by a negative buffer (to shrink back to near original size).

Finally to get the look I was after, used Geometry simplify, 20m tolerance.

This removes the "round corner" buffer artifacts, and gives a more "hand drawn" feel:- 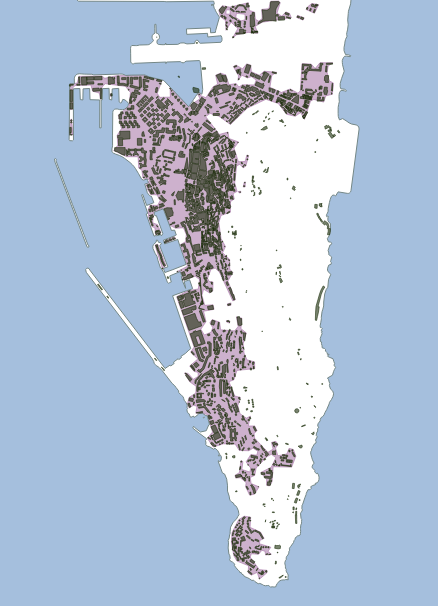 I'd still be interested to hear of any better / other ways to do this :)

Not the answer you're looking for? Browse other questions tagged qgis cartography clustering or ask your own question.