What tool could I use to merge separate line vectors?

I started with a line vector file consisting of several creeks. The problem with that file was that most of the creeks within the file were broken illogically into segments, even those that should have been contiguous. (I.e. Whoever initially created the vector file and attempted to digitize the creeks did not get it right the first time, even though the visual appearance served the purposes of the map at that time.)

To solve this, I found I could use singleparts to multiparts QGIS tool to make the separate stream segments whole (avoiding using the word join or merge because I didn't want to confuse with these tools as the segments I was putting together were all within the same line vector). The result, however, is that each newly whole stream became a separate line vector shapefile. Now I need to figure out within QGIS (or other tools accessible through QGIS?) how I can "merge" the separate creek line vector shapefiles into one shapefile that I can make appear in layers list in such a way as to name all the creeks separately rather than simply "blue line = creeks"). I'm used to ArcGIS and am learning QGIS bit by bit. I don't know whether I need to figure out how to put in spatial reference such as coordinates (but this being a stream, I would have to figure out how to put coordinates for a stream - headwater, for instance?) or determine if QGIS uses ObjectIDs (no indication thus far.) 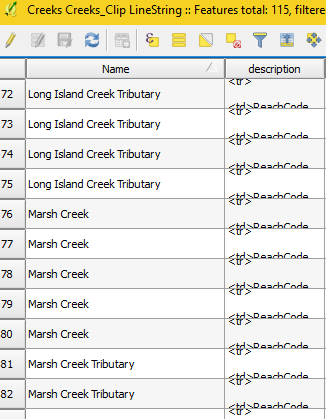 The best thing would be to use 'Line dissolve' from the SAGA-Toolbox in the proccessing window onto your unprocessed data. 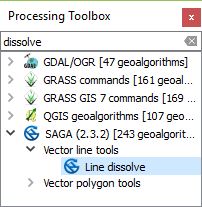 With this you can 'dissolve' Lines with the same attributes into one geometry. Applied on your example this would mean all lines with the attribute "Name" = 'Marsh Creek' could be merged to a multigeometry. 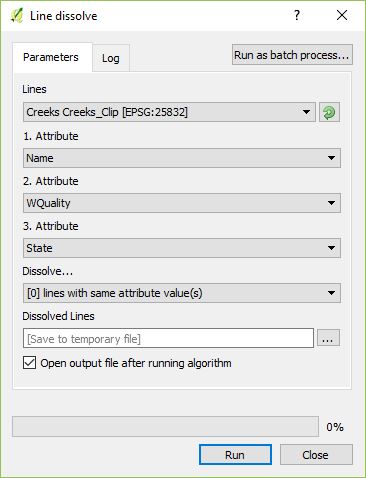 The segmentation of those creeks could have other reasons than plain drawing error, like field trips to gather data or crossing administrative borders or changing water quality. Just my thoughts and probably something for another question ;)

Not the answer you're looking for? Browse other questions tagged qgis merge linestring vector-layer or ask your own question.