I can't publish data from SQL 2008 Server/Database to our ArcGIS Server 10.5.1. Actually, I can't even register that database at all. Error message is below.

Our ArcGIS Server, 10.5.1, has few other databases register to it, which are on 2016 SQL Server. I can publish data from it. The server has both Microsoft ODBC drivers, 13 and 11. I have installed driver 11 just now to see if it fixes the problem but it did not seem to do it. 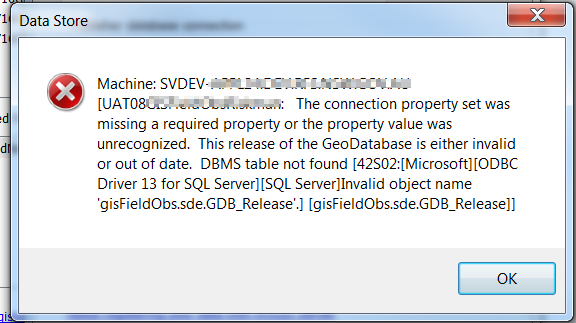 Has anyone been able to register both, 2008 and 2016 SQL Server databases, and publish from both?

How do I register 2008 SQL Database to the server?

You won't be able to work with SQL Server 2008, it's not supported with ArcGIS Server 10.5. System requirements page.

The latest version of ArcGIS Server that supports SQL Server 2008 SP3 is 10.3.x.

As a general rule, Esri only supports three generations of a database product with each ArcGIS release, but this is strongly influenced by the database vendor's support for products (if the vendor won't support the driver/database combination, Esri can't either).

In your particular case, you can go to the ArcGIS Server System Requirements page, which links to "Supported databases" which links to the Microsoft SQL Server page, where it states that Esri supports (and has certified) SQL Server 2016, 2014, and 2012 (SP3) with ArcGIS 10.5.x.

There is also a "Note" which states:

Esri tries to telegraph their support intentions with updates to the Deprecation Plan documents, which you can find by googling "ArcGIS Deprecation plan 10.n" (in this case, 10.4), which includes:

Not the answer you're looking for? Browse other questions tagged arcgis-server enterprise-geodatabase sql-server arcgis-10.5 arcgis-publisher or ask your own question.