I am attempting to display various shellfish species on a map. The shellfish layer is organized so that the species display in the desired order on the legend. However, the result is that one point is blocked by another, circled in red below. I can't change the symbology or the order of the legend. Is there a way to select an individual point and bring it to the front?

I'm using ArcGIS 10.3 btw. My first idea is to create the legend to look exactly how I need and then convert it to a graphic. After which I can change the order of the species within the layer without it effecting the legend. My other idea is to add the layer in the second time, only display the category that is being covered, and place this on top of the first layer. I suppose either will work but is there a better way to solve this problem? 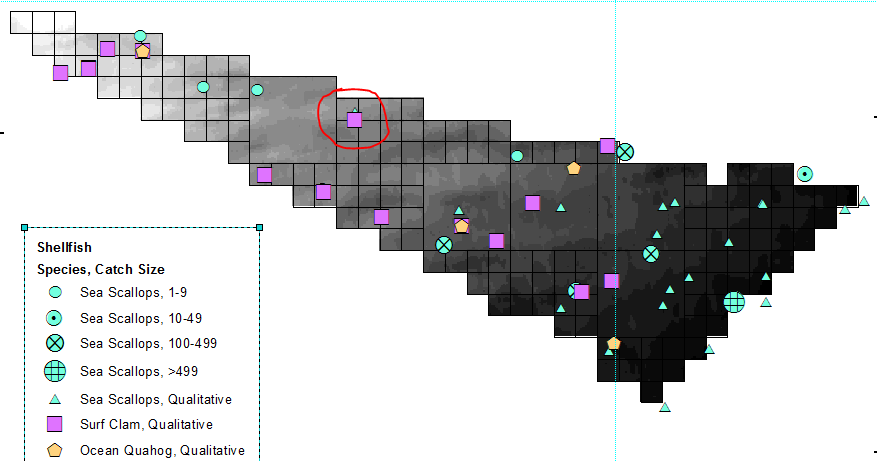 To alter the draw level of all the records in a feature class go to Layer Properties, select the Advanced drop-down menu, choose Symbol Levels. In the Symbol Level's dialog box check Draw this layer using the symbol levels specified below. Highlight Seas Scallops, Qualitative and use the arrows to move that row to the top. Hit OK.

If you just want to put that one point on top then select/highlight the point. From the Layer Properties select Selection. Next, select Create Layer from Selected Point. This will make an in-memory layer of that selected record that you can move to the top of the table of contents.

GBGGBG
4,67666 silver badges2323 bronze badges
add a comment  |
-1
Want to improve this post? Provide detailed answers to this question, including citations and an explanation of why your answer is correct. Answers without enough detail may be edited or deleted.

Try selecting all, deleting, and then undo. Works every time.

Not the answer you're looking for? Browse other questions tagged arcgis-desktop legend display or ask your own question.