I am trying to understand the viewshed and observer points tool in spatial analyst.

I want to show which areas of land can see a wind turbine, or put another way, from where can the wind turbine be seen!

In my simplified model I have just the DEM and a point shp which contains the following fields: OFFSETA and OFFSETB.

If I calculate the viewshed as follows: OFFSETA= 1.65 (Eye-level) and OFFSETB = 50 (the top of the windturbine) what am I actually calculating? Could it be all cells which the observer (at a height of 1.65m above the DEM) would observe if a 50m tall wind turbine would stand in every cell? in other words... these are the cells in which a 50m tall wind turbine could be seen from the observation point?

Because I want to know from where the turbine is visible, I thought I should put the observer´s eye-level on top of the wind turbine (50m). Now I can just calculate all cells that I can observe on the DEM + 1.65. If I can see then from the top of the turbine then I am assuming they can see me, right?

Now the practise: I created two viewsheds as above described. 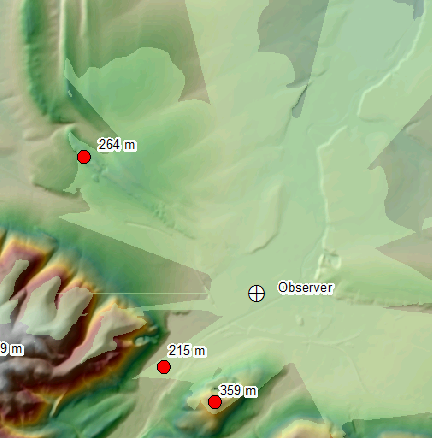 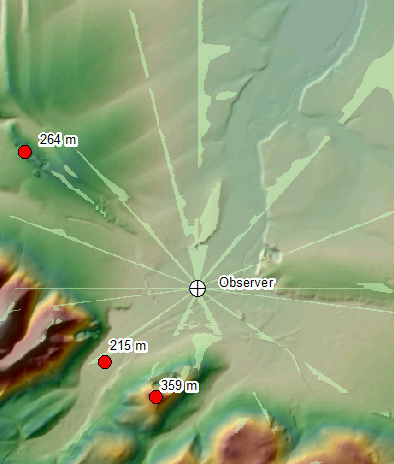 The two approaches gave two very different pictures When the OFFSETA = 50m I get these straight lines.

I am trying to understand why?

For a ZTV you would not normally use the Observer Points tool unless you need to know which turbine is visible at a given location and you have less than 16 turbines. Use the Viewshed tool. The simple setup you need for the calculation is like this:

ArcGIS applies OFFSETA to your points (turbine locations) and the OFFSETB to the DTM as you rightly say.

I have lost count of the number of these calculations I have done with this set up on commercial projects so I rather surprised by both of your images. I assume that the point labelled 'Observer' is you 'turbine' location. In which case I would have concerns about Image 1 as much as Image 2. In fact image 2 looks like a much more likely result for the setup in image 1!

Is there anything unusual about the DTM? What is its source. If it is Ordnance Survey 1:50k Panorama data then there are some rare but serious errors lurking in that data including pits, spikes and trenches (where they mucked up the tiling of the DTM data). Check your data to make sure you have not put your Observer in a hole!

PS, if you are using UK data, can you give me the coordinates of your observer and I will try and recreate your issue.

My input was the same point shape as used in ArcGIS Spatial Analyst. 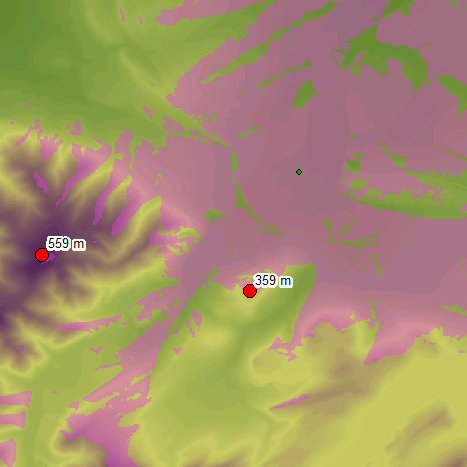 This result seems to match the 3D Analyst "line of sight" tool exactly as shown in the next screenshot. 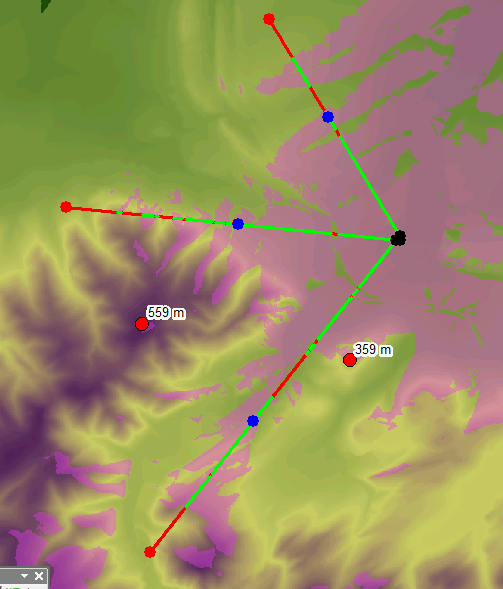 Not the answer you're looking for? Browse other questions tagged arcgis-desktop dem spatial-analyst viewshed visibility or ask your own question.

3
Using OFFSETA or OFFSETB in Viewshed (ZTV) calculations in ArcGIS

1
arcpy.sa.Viewshed with OFFSETA
1
Calculate cells from which the feature would be visible above the skyline (horizon)
2
Using OFFSETB in viewshed analysis of ArcGIS Desktop?
2
Line of Sight and Viewshed Discrepancy
1
Determining which specific features are visible from observer points using ArcGIS 3D Analyst?
3
Using OFFSETA or OFFSETB in Viewshed (ZTV) calculations in ArcGIS
4
ArcGIS Viewshed Outputs
1
Viewshed analysis: how to assess the amount of a building that would be visible?
0
viewshed analysis: how to assess the visibility of at least the top 3m of a tower?