I'm currently writing an assignment for my remote sensing class and while I think I have correct answer was wondering what people who do this stuff for a living think.

The question is: which satellite out the Landsat TM (Thematic Mapper) and SPOT 5 would you use to map general extent of a 300km x 300km study area.

My answer was that you would use the SPOT 5 as it is higher resolution and would let you get a finer extent vs the 30m resolution of the Landsat TM. However the SPOT 5 has a small swath area so you have to use more images. I also thought about the 2200km VMI swath on the SPOT 5 but the resolution is 1km.

I agree with @vascobnunes opinion but if you want to define certain objects you have to use LANDSAT TM because more classification needs more bands as (R, G, B, NIR, MIR, TIR, FIR)... and my choice is that you should use LANDSAT TM (I gave same information in the following explanation) for vegetation.

The important thing in this case is that you should look at relative spectral response (RSR) of your satellite.

Relative spectral response (RSR) measurements are assumed to be constant for all detectors covered by a common filter and are normalized to unity AT peak response. There are currently no methods to check spectral stability with time from either on-orbit or Ground measurements.

In addition to RSR, temporal resolution is so important for repetitive data acquisition cycle...

This is the relative spectral response for LANDSAT TM: 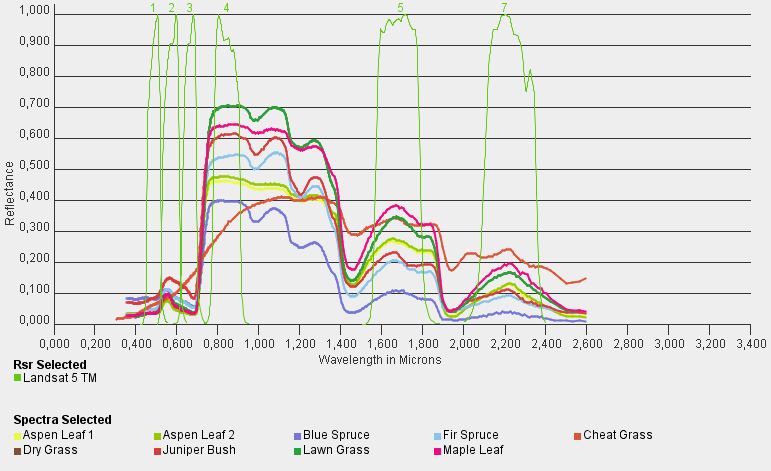 There is an information here about Assessment of NDVI- differences caused by sensor- specific relative spectral response functions.

The Normalized Difference Vegetation Index (NDVI) is the most often used remote sensing-based indicator to monitor dynamics of land surfaces and environmental changes. Due to different sensor characteristics, the NDVI values vary according to the recording system. This study focuses on the factor of spectral sensor characteristics, which can complicate the interpretation of multisensoral NDVI data. Therefore, multispectral bands of Landsat 5TM, QuickBird and SPOT5 were simulated from hyperspectral data. These simulated data sets show identical characteristics (except spectrally) like sensor geometry, atmospheric conditions, topography and spatial resolution. This allows a direct comparison of NDVI differences caused by the factor of different spectral characteristics.

I have made a summary for you from this document about spectral values for NIR and Red band... 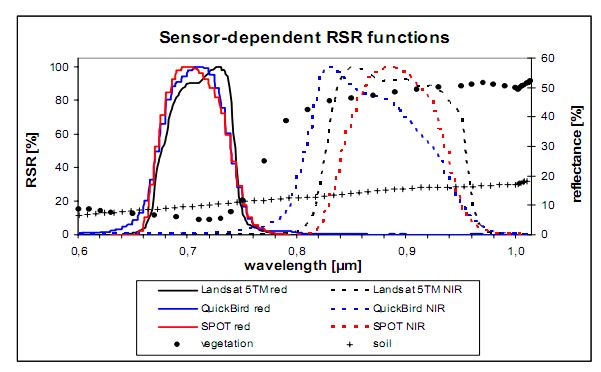 Especially in the NIR region the RSR functions of the sensors vary from each other. Conspicuous is that the gap between the red and NIR band of Landsat 5TM as well as of SPOT5 is wider than the gap between the QuickBird bands, where even an overlap exists. 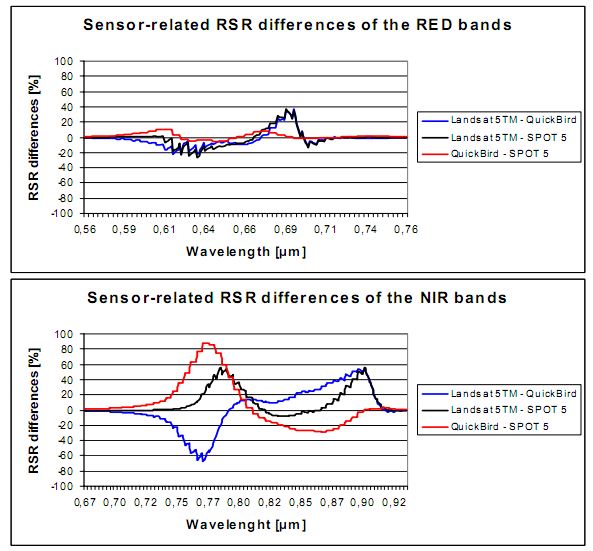 Sensor-related differences (%) of the relative spectral response functions of the red (a) and near-infrared (b) bands of the sensors.

If you only have SPOT 5 and Landsat TM to choose from, money is not a problem and for a small area of 30 000ha, I would agree that SPOT5 is the best choice, although Landsat would have some strong advantages:

You also would have good options with Rapideye, Aster, or LISS-IV.

The purpose of such dataset is the main thing to consider. Just visualization? Very detailed area calculations? Proximity analysis? What's the smallest vegetation area that you want to have represented in your dataset? What's your timescale and workforce for this? All that should give you the answer to your question.

A lot of things to consider and the purpose of such project is the main guidance.

Not the answer you're looking for? Browse other questions tagged remote-sensing satellite landsat or ask your own question.