I want to combine GADM with TDWG layer in the way the Identity tools does in ArcMap. I need to benefit of the highly detailed outer borders of GADM and also get the extra info with its inner borders from TWDG (like the illustration for Identity tool).

Using the tool gives satisfactory results, however it combines the attributes from both layers only when they overlap, and this can also be an issue at borders between countries where I would want that GADM borders should be considered instead of TWDG. I need to find a way to combine attributes for the remaining non-overlapping zones that share the borders with the output from Identity tool and solve the country overlapping border issue as well (see selection in image below).

The final goal is to intersect the output with points and extract the underlying data (points that fall out of GADM borders, i.e. in sea/ocean, should be excluded).

Below are two more print screens that catch the overlapping country borders and also the non-overlapping areas issue (it happens at the border with sea/ocean): 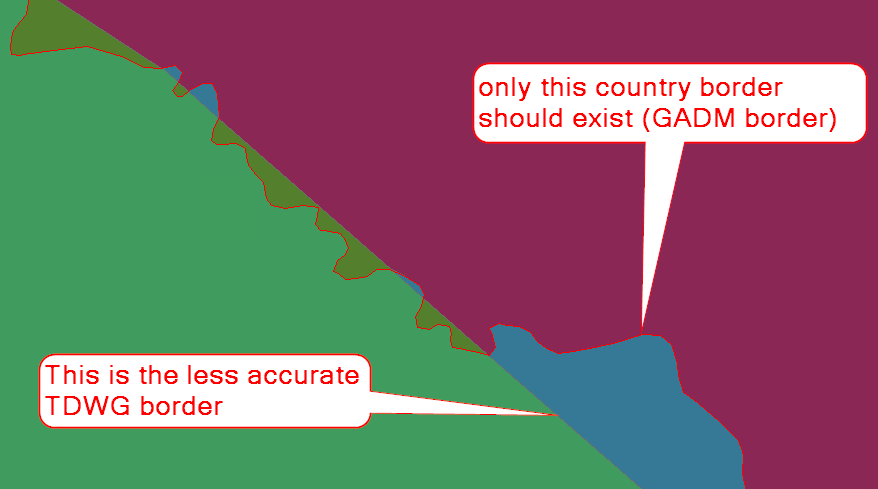 Perhaps another approach would be to use Spatial Join in ArcMap and intersect the points inside GADM with TWDG. Then use a search radius for points that didn't get a match.

However, I remain curious about how to solve the overlapping issues described above.

I think that the topic you need to look at is conflation.

In ArcGIS Desktop there is the Conflation toolset:

GIS data often comes from many sources. Spatial and attribute differences among various data sources sometimes requires you to resolve the inconsistencies before you can make use of the data. Conflation tools help you reconcile data from multiple sources and obtain the best possible data quality for analysis and mapping.

In particular, the tool which to be worth you investigating may be Align Features:

but take note of its caution that:

This tool modifies the input data. See Tools with no outputs for more information and strategies to avoid undesired data changes.

It requires an Advanced level license.

Not the answer you're looking for? Browse other questions tagged arcgis-desktop arcmap overlapping-features overlay or ask your own question.