In QGIS 2.18, new vector layers resulting from QGIS tools have a default name related to the corresponding tool. For example, when I perform the "Lines to polygons" operation (under QGIS Vector menu), the resulting layer is always named Polygons from lines in the Layers Panel -- even if I ask for the shapefile to be saved under a specific name. When I compute a buffer, the new layer is called Buffer, and so on.

If I recall correctly, this was not the case in QGIS 2.14 (and previous versions): the default name of a layer was the name of its shapefile.

I find the new behaviour annoying since it leads to confusion between my layers; every time I use a QGIS tool, I have to uncheck the "Open output file after running algorithm" option, then manually open the newly created layer in order to display its "real" name. I can also change its name in the layer properties, but this is still irritating.

Is there a way to go back to the traditional behaviour? E.g. display by default the shapefile name (when specified) in the Layers Panel instead of some generic name?

From QGIS 2.16 vector menu functions using processing toolbox, so this behaviour can be changed in processing options in menu Processing -> Options.... In General options check the Use filename as layer name. 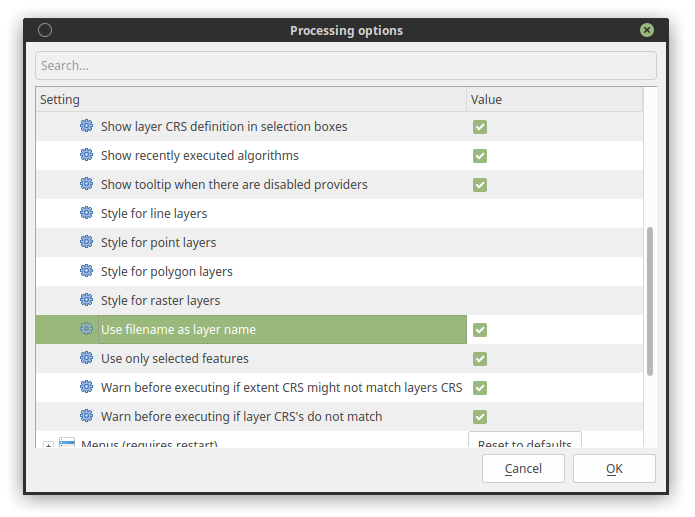 The Processing options in QGIS 3 are in main settings Settings -> Options in Processing tab. Also can be launched directly from processing toolbox -

Not the answer you're looking for? Browse other questions tagged qgis layers qgis-2.18 or ask your own question.

7
Can QGIS give GeoJSON layers a meaningful default name?
2
How to get WMS layer title instead of the layer name in QGIS?
8
Changing display name of layer with PyQGIS?
8
Accessing “Save Vector Layer As” algorithm in QGIS Processing Model?
4
Store human readable layer name in QGIS style files?
4
Geopackage raster layer name is blank in QGIS Layers panel?
0
Saving default layer name to spatialite/geopackage table?
3
Is there any way to reorder layers in GeoPackage and change the default naming in QGIS?