I have an ID field that is a text datatype. The IDs in the field have a prefix, and are padded with zeros to always be a specific length. Examples:

I would like to use the Field Calculator to generate sequential IDs for new records (records are batch loaded from various sources by the thousands).

I have a python script that almost does this:

Modified from: Create sequential numbers in a field using Python in the Field Calculator

Unfortunately, the tool isn't smart enough to dynamically adjust for the difference in the number of digits between numbers (99 to 100, etc.):

How can I use the field calculator to generate sequential, prefixed IDs that are padded with zeros to a specific length?

I'm not married to Python; VBScript would be an acceptable alternative. 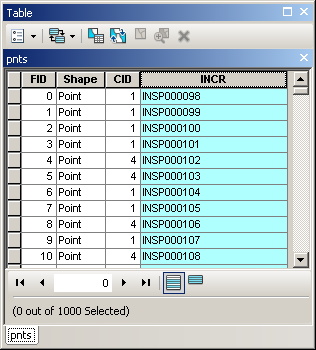 Here's a slight twist on FelixIP's answer. It's a bit more user friendly for non-python people.

The user edits the variables at the top, rather than trying to interpret and edit the code body.

Add some if logic at the end to evaluate the rec number length, try:

Not the answer you're looking for? Browse other questions tagged arcgis-desktop arcgis-10.3 field-calculator python-parser unique-id or ask your own question.