Testing layer for Has Selection using fidSet not working as expected

I've researched this extensively but there doesn't appear to be anything newer than 2014.

I am trying to test if a feature layer has a selection or not. I'm doing this via my own python script in ArcToolbox.

Essentially what is happening is that the length of len(arcpy.Describe(lyr).fidSet.split(";")) when no features are selected is returning 1. Prior posts on this subject indicate that it should return 0. Below is some very simple code:

If zero feature are selected this returns

If one feature is selected it returns

If more than one feature is selected it returns

I've tried testing the returned string with is None and also putting not in front of the length statement, but those still return Has Selection when no features are selected.

As you know, FIDSet returns a list of ID in a string, separated with a semi-colon.

Your problem is not really a arcpy problem, but it is due to the fact that .split(delimiter) returns a non empty list (see SO for more details).

So, in fact, you should simplify your test: test for FIDSet==0 and it will be tell you when there are no selected elements.

arcpy.Describe (lyr).FIDSet returns an empty string ('') when no selection is present. Empty strings return False in a logic test. Thus, use: 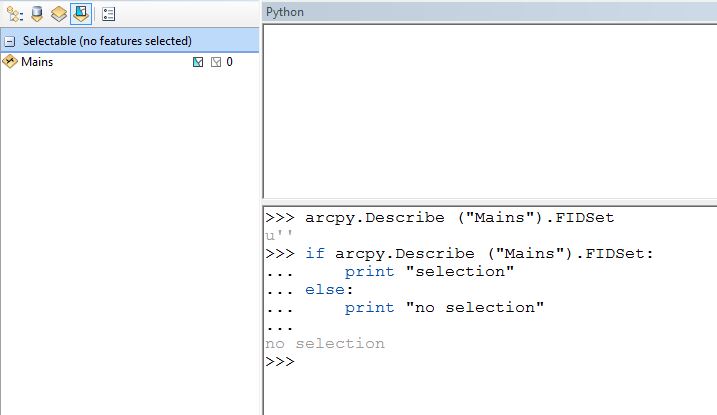 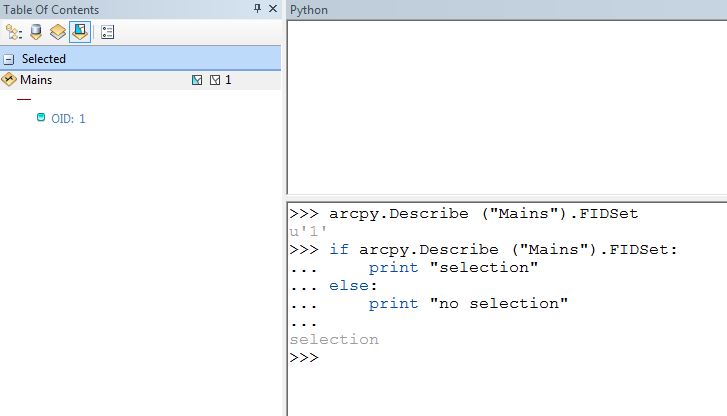 Not the answer you're looking for? Browse other questions tagged arcpy arcgis-10.4 or ask your own question.