How to project ASCII grid given in degrees?

I have an ASCII file (.asc format) with 1/12 degree grid-squares of the whole world (see http://www.fao.org/soils-portal/soil-survey/soil-maps-and-databases/harmonized-world-soil-database-v12/en/), which I want to project onto WGS_1984_UTM_Zone_43S in order to determine some areas of land cover within some polygons in this projection.

I'm using ArcGIS at the moment, but when I put the ASCII straight into ArcMap, it incorrectly interprets the units as metres, not degrees (so the world map is only 360m from side to side!). This I put down to having no defined spatial reference 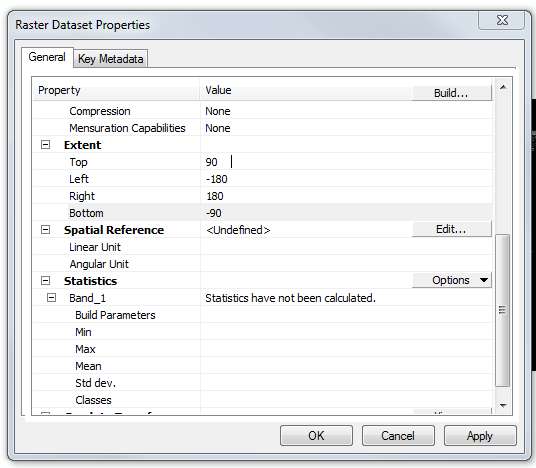 How should I set the spatial reference in order to get the appropriate scale?

You're on the right track! I would suggest working within a geographic coordinate system whuich you've correctly identified is what your data comes in.

First of all you need to define the spatial reference of your source dataset, which you can do by clicking the Edit button next to Spatial Reference: in the Raster Properties dialogue you've provided a screenshot of. Based on this metadata record the spatial reference you want is GCS WGS 1984.

Either way you will have to decide on how you want to sample the raster cells as they're unlikely to match up with your polygons. Which ever route you go down make sure your dataframe is also set to the same co-ordinate system.

An introduction to some of the issues surrounding the re-projection of rasters is available here.

Not the answer you're looking for? Browse other questions tagged arcgis-desktop coordinate-system arcgis-10.4 esri-ascii-raster or ask your own question.