Divide a complex shapefile into a grid

I have a decently detailed shapefile with polygon/multipolygon features (the file is about 500mb). It's actually a shapefile of the entire world, with the features representing coastlines. I need to divide this data using a grid. To be clear, I don't want to 'sort' the data, but actually cut the polygons up into tiles. I realize this question has been asked before but the solutions I found didn't work for me.

Someone suggested using PostGIS at one point, since it has an intersection function -- but PostGIS's ST_Intersect uses the same GEOS back end as OGR does. In fact they both call the same function as far as I can tell, so I don't think that PostGIS will yield different results.

I was looking for suggestions as to what else I could try. I need a robust application or toolkit that can divide highly detailed shapefiles into tiles.

In response to Brent:

I've tried playing around with this more and in general it just seems that the results are unreliable both using GEOS and with QGIS (which uses fTools, I don't know if that in turn uses GEOS again). I was wrong in stating the size of the grid has nothing to do with the results -- the bigger the grid is, the better the results (that's good to know but still not a solution). Here's a screenshot of a really spaced out grid that mostly worked, but failed partially in one tile: 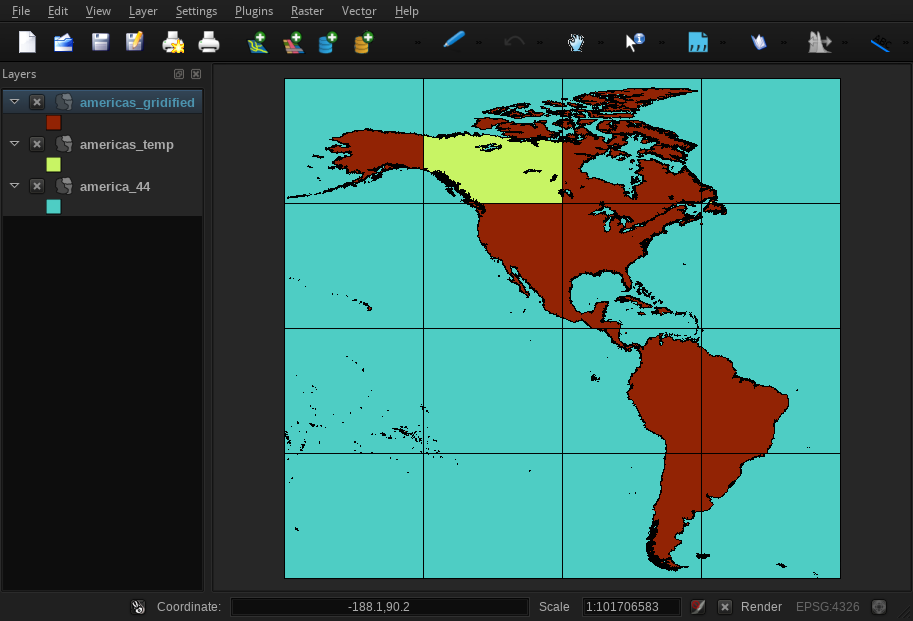 The geometry is clean -- QGIS shows 0 errors with the "Check Validity" tool. I'm not looking to approach this problem in a step by step fashion; verifying whether or not certain features failed the intersection on a dataset this big when its not visually apparent (and it won't be with smaller tiles) isn't practical.

I just ended up creating my own tools to do this.

I used the Clipper library (http://www.angusj.com/delphi/clipper.php) along with OGR to divide my data set up. Something to note is performing intersections naively with this lib takes very long, so I instead used a quadtree approach... ie, divide into four grid cells, divide each of those into four more, etc, until you get your desired resolution. The lib works great though, I've attached a screenshot showing the results on the eastern hemisphere: 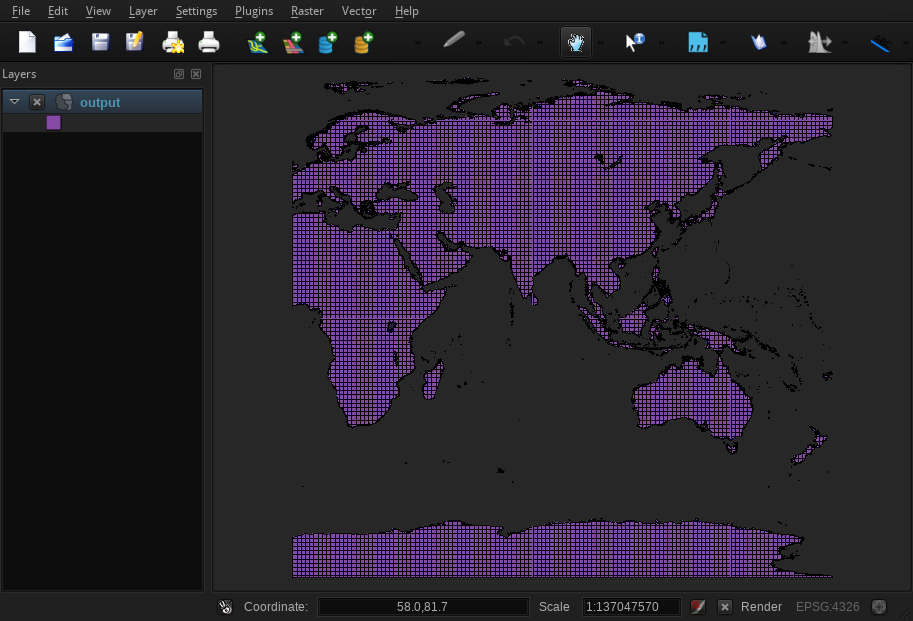 The above result took about 4.5 hours on a 1.33GHz processor.

Here are the tools in case someone runs into a similar issue in the future. Please note that they're hacked together proof-of-concepts and you probably shouldn't use them directly (might serve as a good starting point for something though):

It definitely sounds like you have geometry issues. It is unlikely that will be able yield clean results from a dirty input file regardless of the software used, unless you first address your geometry problems. Once you get your geometry issues sorted out, you could try the following if you are still having issues:

1) Make sure that your grid dataset has the same projection as your world polygon dataset. If not, recreate it in the proper projection.

2) Convert all features to single part - much easier to process

Another approach might have been to try a vector-to-raster conversion to create a point dataset & then use the point dataset as a basis for writing some code to create your tiles.

Not the answer you're looking for? Browse other questions tagged qgis shapefile ogr qgis-processing vector-grid or ask your own question.

18
How to split a vector into equal smaller parts in QGIS or similar?
8
How to Split a vector file into several different files using a Grid in QGIS?
1
Tabulate Areas is losing rows

3
Divide shapefile
1
Polygon grid shapefile for landmass
8
Getting error when clipping shapefile to shapefile using ogr2ogr?
5
Divide grid in smaller cells
1
KML to shapefile (ogr2ogr)
3
How to divide a shapefile based on a 500x500m grid clip areas based on a grid?
2
How to calculate how many grid squares a line shapefile covers