I know I'm probably missing something very basic, but I've been trying to join census block data together. The table contained within the block shapefile contains a field called GEOID10, which has concatenated the state, county, tract and block fields together. I have downloaded a table from the american factfinder that contains the total population for each block from the 2010 census and it contains a field called Id2 which has the same concatenated field as GEOID10. However, when I try to join the 2 together, ArcGIS won't give me Id2 as a field to base the join on when I choose GEOID10 as the field to use from the layer. Any idea why this is? 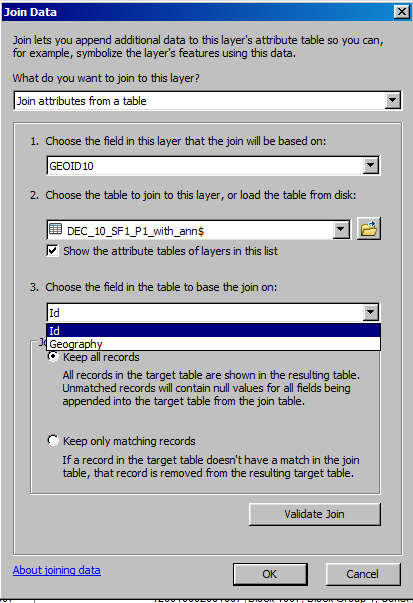 From the text justification within the GEOID10 and Id2 cells I would bet that the former are defined as integer and the latter as text.

For fields to be used as join fields they must be of the same type.

Not the answer you're looking for? Browse other questions tagged arcgis-desktop attribute-joins census arcgis-10.5 or ask your own question.