How accurate is approximating Earth as sphere?

What level of error do I encounter when approximating the earth as a sphere? Specifically, when dealing with the location of points and, for example, the great circle distances between them.

Are there any studies on the average and worst case error compared to an ellipsoid? I'm wondering how much accuracy I'd be sacrificing if I go with a sphere for the sake of easier calculations.

My particular scenario involves directly mapping WGS84 coordinates as if they were coordinates on a perfect sphere (with the mean radius defined by the IUGG) without any transformation.

In short, the distance can be in error up to roughly 22km or 0.3%, depending on the points in question. That is:

To explore these dependencies, I have plotted the errors between endpoints at (lat,lon) = (mu,0) and (x,lambda) as a function of latitude x between -90 and 90 degrees. (All points are nominally at an ellipsoid height of zero.) In the figures, rows correspond to values of mu at {0, 22.5, 45, 67.5} degrees and columns to values of lambda at {0, 45, 90, 180} degrees. This gives us a good view of the spectrum of possibilities. As expected, their maximum sizes are approximately the flattening (around 1/300) times the major axis (around 6700 km), or about 22 km. 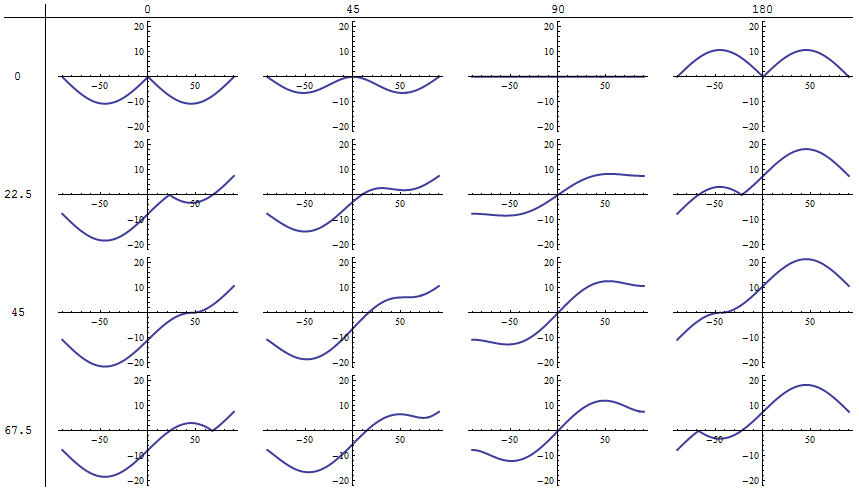 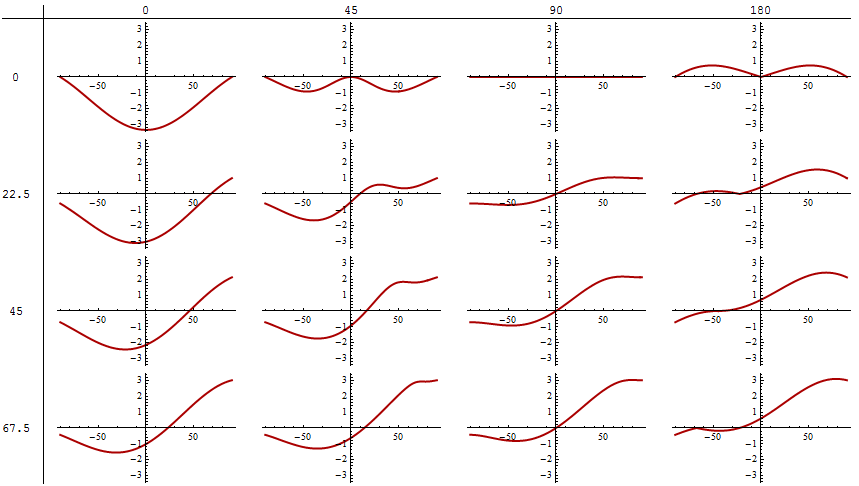 Another way to visualize the errors is to fix one endpoint and let the other vary, contouring the errors that arise. Here, for example, is a contour plot where the first endpoint is at 45 degrees north latitude, 0 degrees longitude. As before, error values are in kilometers and positive errors mean the spherical calculation is too large: 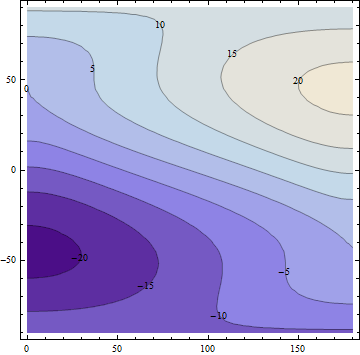 It might be easier to read when wrapped around the globe: 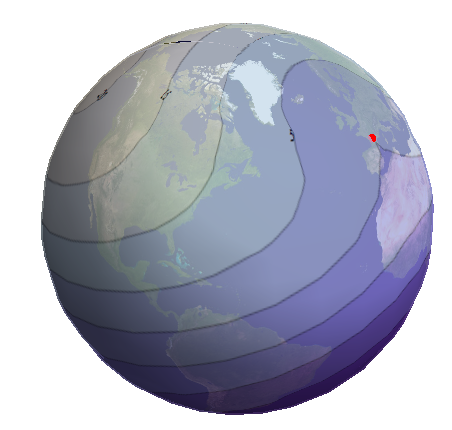 The red dot in the south of France shows the location of the first endpoint.

For the record, here is the Mathematica 8 code used for the calculations:

And one of the plotting commands:

with the maximum evaluated over all possible pairs of points.

If the flattening f is small, the spherical radius which minimizes err is very close to (a + b)/2 and the resulting error is about

ADDENDUM: Here's another way of approaching this problem.

Select pairs of uniformly distributed points on the ellipsoid. Measure the ellipsoidal distance s and the distance on a unit sphere t. For any pair of points, s / t gives an equivalent spherical radius. Average this quantity over all the pairs of points and this gives a mean equivalent spherical radius. There's a question of exactly how the average should be done. However all the choices I tried

all came out within a few meters of the IUGG recommended mean radius, R1 = (2 a + b) / 3. Thus, this value minimizes the RMS error in spherical distance calculations. (However it results in a slightly larger maximum relative error compared to (a + b) / 2; see above.) Given that R1 is likely to be used for other purposes (area calculations and the like), there a good reason to stick with this choice for distance calculations.

ANOTHER ADDENDUM: You can squeeze a little more accuracy out of the great circle distance by using μ = tan−1((1 − f)3/2 tanφ) (a poor man's rectifying latitude) as the latitude in the great circle calculation. This reduces the maximum relative error from 0.56% to 0.11% (using R1 as the radius of the sphere). (It's not clear whether it's really worth taking this approach as opposed to computing the ellipsoidal geodesic distance directly.)

Not the answer you're looking for? Browse other questions tagged coordinate-system distance spherical-geometry datum accuracy or ask your own question.

2
What is the radius of earth
17
Difference between Vincenty and great-circle distance calculations?
27
Are ellipsoids a mathematical necessity?
21
Geodetic Coordinates And Latitude, Longitude
8
How to find a point half way between two other points?
4
How can I calculate the distances between my points in sequence automatically?
4
How to calculate midpoint given north/south latitude and east/west longitude?
12
How big does a circular geofence need to be for the curvature of the earth to matter?
6
Dividing a geographic region
6
Which spatial-reference system is used by the Haversine formula?
See more linked questions

5
Line intersection with circle on a sphere (globe or earth)
1
How to calculate smallcircle on sphere
1
Generate random location within specified distance of a given point
1
How geographically accurate is Google Earth?
3
New coordinate system?
8
Which is the most accurate method of measuring distance?
2
Fast(est) way to detect if point is in range of another point? (Geographic Coordinates)
2
Calculate the distance between two points on a sphere (earth) going through the earth?
3
How to properly generate distance map?