Determine whether a polygon crosses the antimeridian

I'm working on a system that uses bounding boxes as a fast first check for a point-in-polygon filter. My current naive implementation (just taking the min/max lat and lng for all points) fails on polygons that cross the antimeridian (180 longitude).

I've done enough research to determine that the Right Way is probably to use spherical polygons, but I'm hoping to avoid the complexity of this approach (code complexity and time complexity). I think I can ignore issues at the poles, at least for the present, so the problem is relatively simple if I can accurately identify polygons that cross the antimeridian, set the appropriate east/west values, and then change the bbox check if east < west. But I'm stuck on identification.

Given these constraints, what's the easiest way to identify a polygon that crosses 180 longitude?

The easiest way to identify a polygon that crosses 180 longitude is:

This method is tested with ArcGIS Desktop: 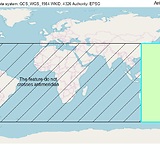 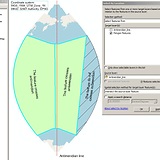 For most practical purposes, after you've detected antimeridian crossings, you probably want to split your polygon in order to allow further geospatial operations. Here's the full tutorial + code snippets using Python and Shapely.

Not the answer you're looking for? Browse other questions tagged polygon algorithm antimeridian or ask your own question.

5
PostGIS 2.0 geographic polygon has max longitudinal range
28
Best-practices for databases and APIs with geographic data spanning the antimeridian
6
Is there an inverse operation to ST_Shift_Longitude in PostGIS < 2.3?
2
data reprojection and the antimeridian
3
Making Polygon that covers the Northern hemisphere in PostGIS?