I have been trying to improve the performance of my Geoserver installation (on xenial 64-bit), so I installed JAI and ImageIO as described here: http://geoserver.geo-solutions.it/edu/en/install_run/jai_io_install.html. Things went fine, and in the server status page Geoserver says that native JAI and Image IO are present (true). The WMS seems faster now, and the JAI memory usage is > 0, so I know it's in use.

I am serving single-band, uncompressed GeoTiff hillshades that I have prepared with inner tiling and overviews, which are 1-2gb in size.

But now I have this issue: at some zoom levels, there are gaps and unrendered sections. It doesn't even seem to be on a per-tile basis, as you can see below. 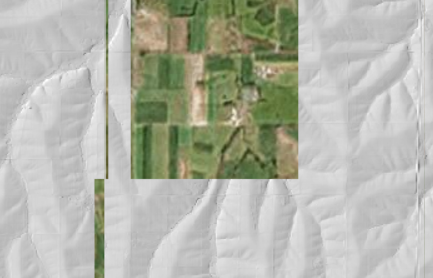 So it seems like this drawing issue is related to JAI and Image IO, because this same tif draws fine on my other instance which doesn't have those libraries installed natively.

edit 2: The GeoTiffs are in Web Mercator so Geoserver is not doing any reprojection. I am using Leaflet on the front end.

UPDATE After some more testing, it's clear that this issue is coming from the Leaflet side of things, not GeoServer. The layer looked fine when I added it to an Open Layers 3 map, and even when I used Leaflet outside of django leaflet, which was the original environment where the issue showed up.

So, I will call this question "answered" for now (partly because I'm not confident in the premise anymore) and consider adding an issue to the django-leaflet repo instead.

Not the answer you're looking for? Browse other questions tagged geoserver leaflet or ask your own question.