Find average density value within a polygon in ArcMap

I've created a point density heat map for a city intended to show areas where there is more or less access to a certain type of public school.

It would be useful to be able to identify which local political districts have the greatest or least access (by proximity) to this type of school. Important here is not just measuring distance to any one school (as in distance to closest point). Rather, access to multiple schools (i.e. greater density) should be rewarded. I want to be able to say something like, "students in District A wishing to attend a school like this have, on average, more nearby options than students in District B." Schools don't need to be in a particular district to be considered an option for the students in that district (so points outside a particular polygon can be considered). In the end, I want some kind of rank or value to compare the districts.

Any suggestions? Looking at the heat map, something equivalent to the average density value would make sense, but maybe there's another tool?

Extra great would be the ability to weight by population density somehow (maybe by census tract)?

Here's a screenshot of the raster heat map, with political district shapefile overlaid: 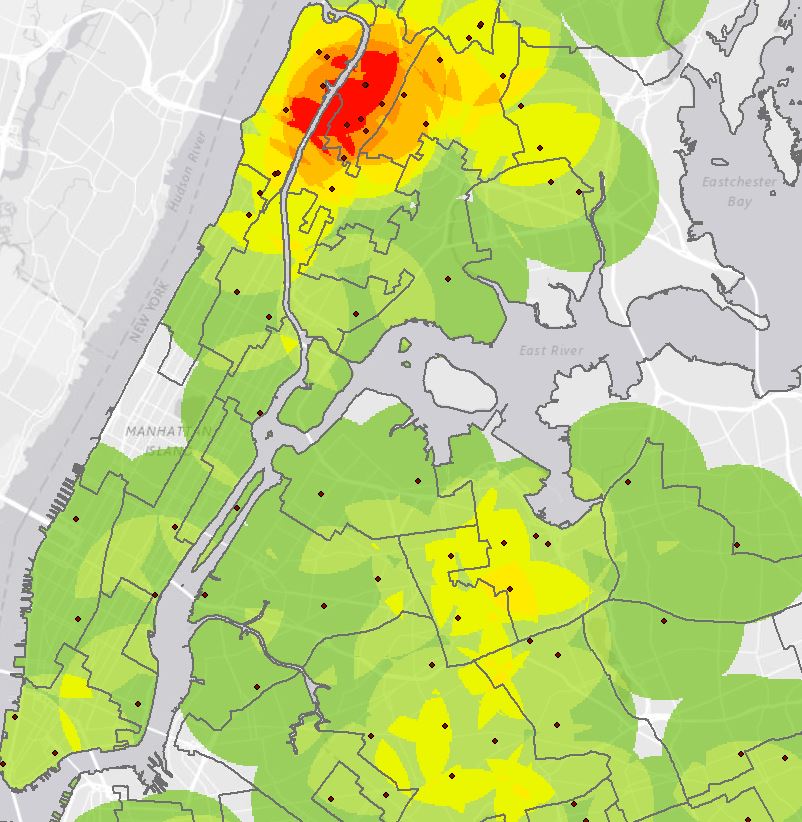 I'm not exactly sure which statistic would be most useful to you but it sounds like a good use for Zonal Statistics as Table.

I would use the polygon layer for the zone layer and the density raster as the value layer. You could use a max value within a polygon or an average or a normalized average.

The question isn't specific but Zonal Statistics as Table would be flexible to provide a few ways of looking at the question. This requires Spatial Analyst but if you used the Point Density tool, you already indicated that you have that.

If you'd like you can also use the tabular output to join back to the original polygon layer to symbolize the result(s).

I suggest an easy workflow in model builder or small code Arcpy. It is even manually doable, if there is a minimal number of polygon to process.

Loop over other polygons.

Join the list of average value with Id of the polygon to you table.

I have already coded in OGR and GDAL.

Not the answer you're looking for? Browse other questions tagged arcgis-desktop heat-map proximity density or ask your own question.