I have a point layer with 2 columns, company name and short name. I have many company name entries but fewer short name entries with some of them being categorised under the same alias. See below for example of my data (can not show original for licensing reasons). 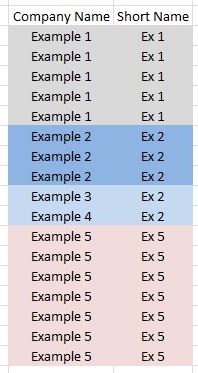 I have decided to go with rule-based styling because I would like to add an expression which states when "short name" = 'Ex 2' but not when "company name" = 'Example 2'. This would style Example 2 and Example 3 the same but identify Example 2 differently.

I realise I could just say:

but that would take some time with my data.

I have the answer, I can write: