Where can I find the finest granularity of 2010 US census population information?

I am writing a re-districting application where I want to be able to create US voting districts based on geographic coordinate population data. In a perfect world, I would have the population for each house and the house's geographic coordinates. I am guessing that per house data is not likely to be available. What is the lowest level available? Blocks? Block groups?

I located a US census website which contains population data for block groups. Is this the finest granularity available for 2010 census data?

For privacy reasons, personally-identifying house-by-house data from the Decennial Census are not available until 72 years after being recorded. Census Blocks are the highest spatial resolution geography for which more recent Decennial Census data are available.

If you only want Census Block populations for a couple of counties, use the Census Factfinder. Choose the table you want (P1 has basic population count) and the desired geography (e.g. All Blocks within Middlesex County, Massachusetts). You'll probably want to download it as a .csv for further processing.

If you want Census Block populations for a much larger swath of the United States, you are in for a world of hurt. You need to jump through a lot of hoops in order to overcome filesize limitations in most database software. The Summary File 1 page has more information.

As noted by dmahr, the lowest level of data available from the Census Bureau is block level data. While it might initially sound appealing to have data which is precise to the housing unit level, this actually will only complicate production of the end product.

In the picture I have included below, the blue box demonstrates the area of a typical census block. In urban areas, typically the area of a census block is bounded on all sides by a street, railroad tracks, a water feature or something which is identifiable. There are, like almost every rule, exceptions.

When creating software for the purpose of reapportionment, you will want to rely on the same data States & local government use when conducting their reapportionment. The data used by these entities is referred to as P.L. 94-171 data and for state level can be found here: http://www.census.gov/rdo/data/2010_census_redistricting_data_pl_94-171_summary_files.html

Additional relationship files for that data can be found here: http://www.census.gov/cgi-bin/geo/shapefiles2010/main

As noted by celenius, I as well highly recommend dumping the data into either a PostGreSQL/Postgis or MySQL database. 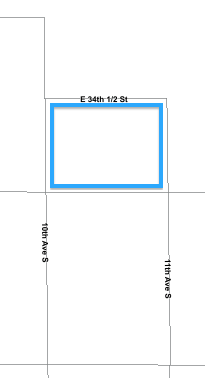 You might check to see if you can legally use the same mapservices that are used by Esri Redistricting Online in an application that you develop.

These mapservices provide data down to the block level.

For more details see this thread.

Not the answer you're looking for? Browse other questions tagged data united-states census redistricting or ask your own question.

1
How to get 2010 Census Block Housing Unit Data for the entire US for 15-digit FIPS blocks
142
What free programs should every GIS user have installed?