Using QGIS 2.18.14, Windows 10, I need help with Batch Processing. I have created this simple model with just two algorithms, a reproject followed by polygon centroids: 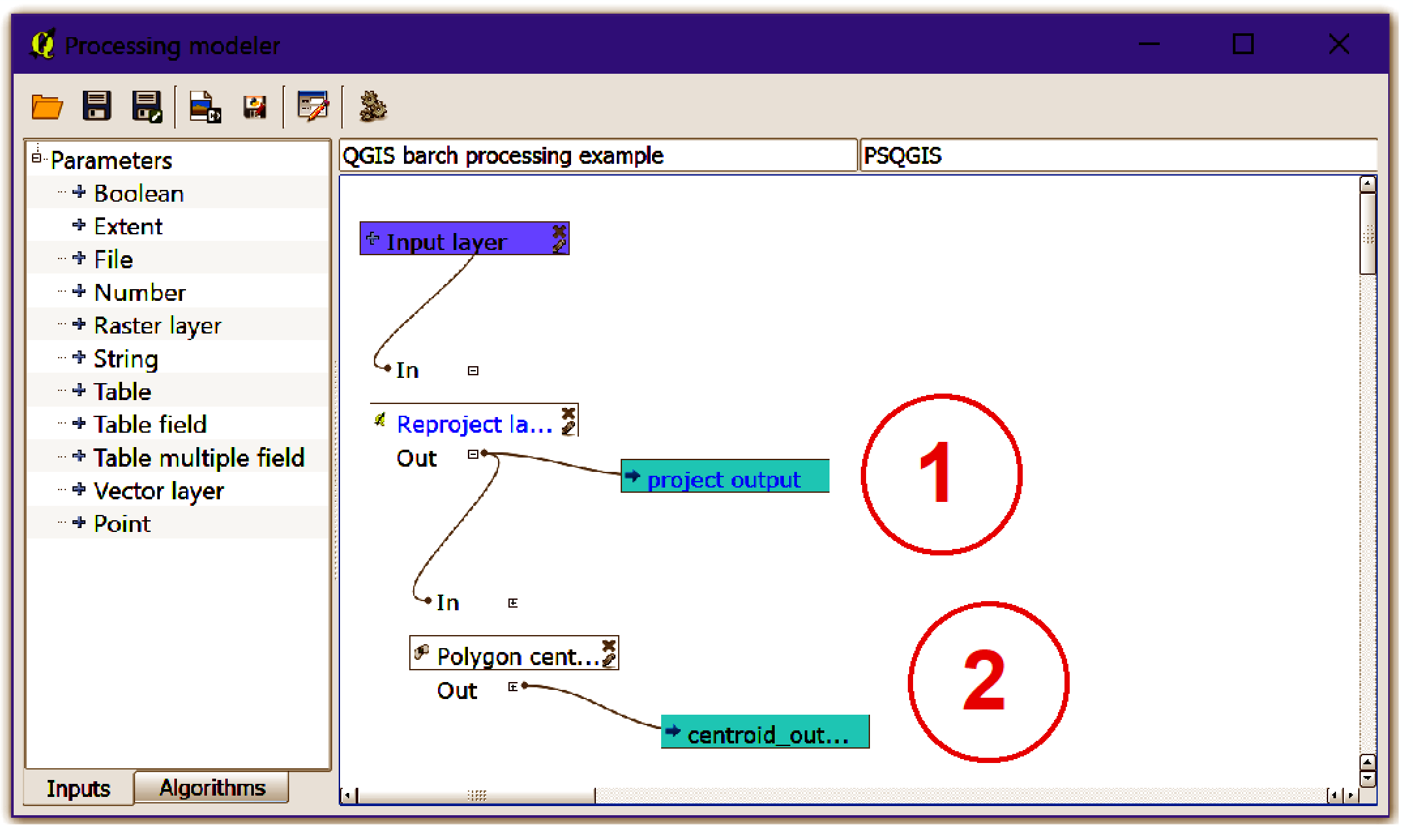 When I try to run this model as a batch process, I follow the QGIS instructions for filling out the Parameter Table. The autofill dropdown for the first algorithm works correctly, allowing me to select the input layer.

However, there is a problem with the second algorithm's dropdown; just like the first algorithm it only includes the input layer as an option. It does not allow me to select the output from first algorithm, which is necessary to complete the model. 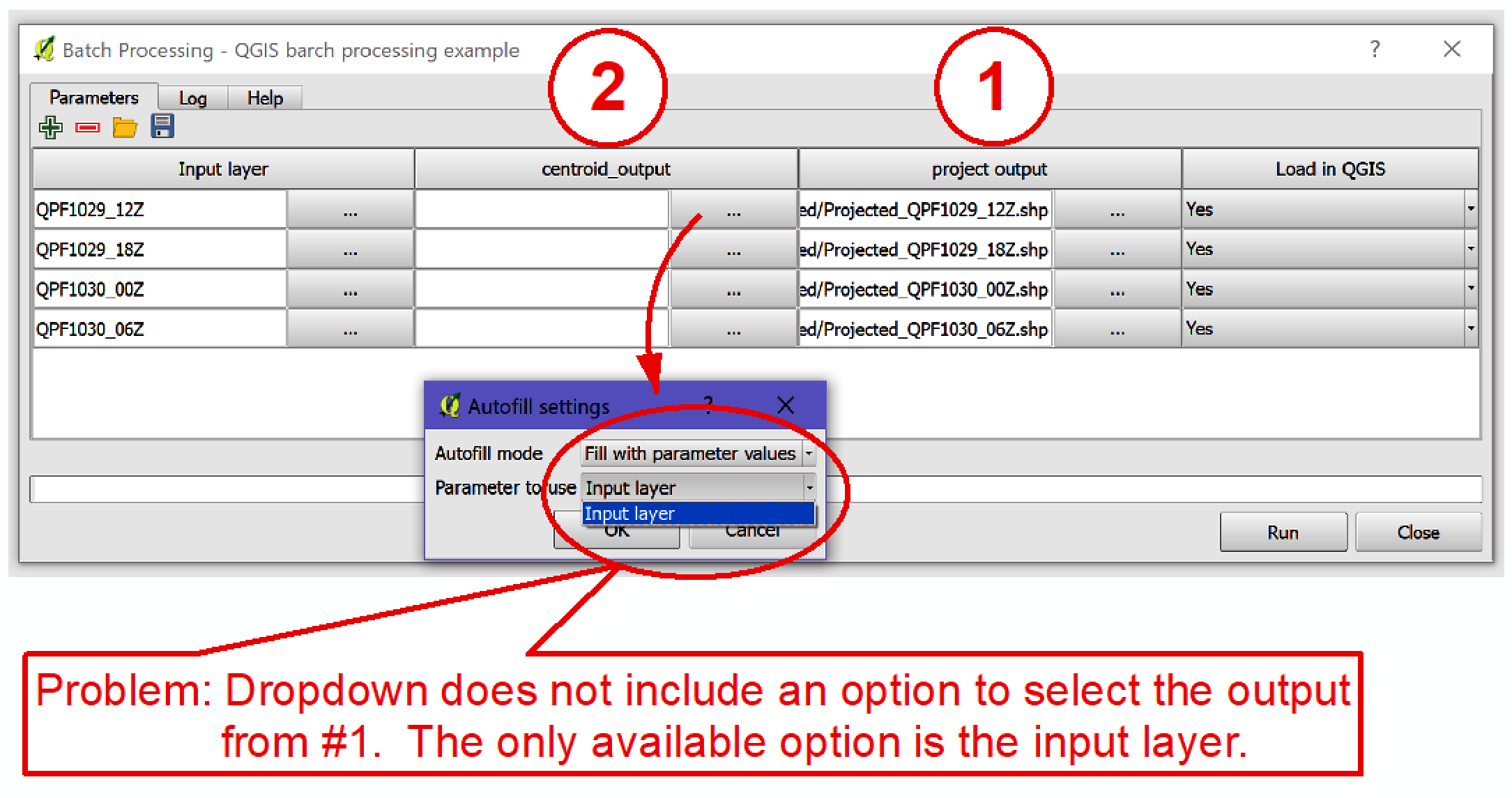 How do I enable the parameter table to offer intermediate output as a selection option? Without this ability, only one algorithm is possible in batch processing.

EDIT: For clarity, my problem is not with the model itself, but rather the batch processor: it does not provide the ability for an algorithm to accept, as input, the output of a previous algorithm.

In my OP, I stated that "...the batch processor ... does not provide the ability for an algorithm to accept, as input, the output of a previous algorithm."

I misunderstood the purpose of the Autofill settings. The "Parameter to use" dropdown in the OP's second screenshot only includes the "Input layer" option, which led me to incorrectly believe that an algorithm could only accept the input layer as a data source.

Instead, the purpose of the "Parameter to use" is to provide a naming convention for the algorithm's output. For each algorithm (displayed as columns in the OP's second image) click […] in the top row of its output column. Navigate to the output layer’s desired directory. In the “Save as” window, enter a string, which will act as a prefix to the input layer name. In my example I used the string "Projected_", which is displayed under the circled number 1. If you look closely, you'll see that the output from that algorithm has the text string "Projected_" added as a prefix to each of the four input layer names. Thus:

For the second algorithm (and this is where I was originally confused), repeat the same naming process as described above, but providing a different prefix. Using my OP as an example, I could have prefixed the output of the second algorithm (confusingly displayed in the first output column under the red circled 2) with something like "Centroid_", with the following result:

In summary, as this batch process cycles, each of the input layers will go through the two algorithms. Each algorithm's output is named according to the prefix provided in the "Parameter to use" dropdown.

This QGIS tutorial helped me understand how to connect multiple algorithms.
Thanks also to @Joseph for his insight.

Not the answer you're looking for? Browse other questions tagged qgis batch qgis-modeler or ask your own question.

4
QGIS Modeler: Where is output from algorithm 'Set style for vector layer'?
2
Is it possible to inject a value into an algorithm text setting in QGIS Processing Model?
5
Programmatically naming outputs from the QGIS Modeler?
1
Filter options are not saving in Dissolve algorithm window through Graphical modeler in QGIS 2
2
QGIS Processing Modeller - Select date by expression