I am aware of methods of comparing the spatial distributions of spatial point patterns and for testing for spatial randomness, but I would like to find out in which ways I could statistically compare two sets of feature values for two sets of points within the same spatial context.

I have quickly done a rough and ready comparison of my points visually so I'm really interested in computing the significance and/or (dis)similarity between point feature values of different surveys of the same area.

Here's a little more background on my specific problem. I am working on a project to develop a method for monitoring subtidal seagrass. Part of this involves sonar surveys of seagrass beds using an echosounder. Each point pattern corresponds to a different survey of the same seagrass bed. The only difference between surveys is either the tidal state (low tide or high tide) or the speed of the survey vessel. The feature values of each point pattern corresponds to a metric of the seagrass bed e.g. bioheight.

Here's a plot of a survey to illustrate. 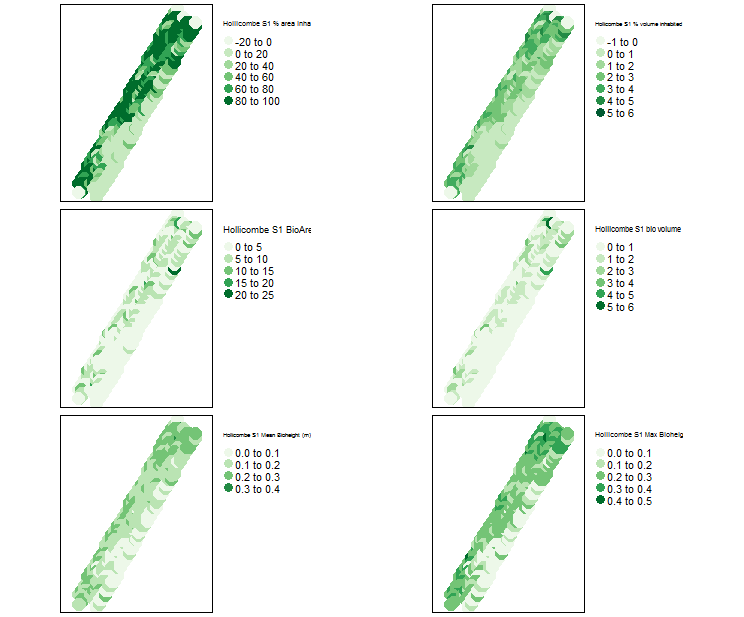 So I want to compare the similarity of feature values for the same metric for different surveys.

I mainly work in R but I am open to solutions using any GIS package.

6
Spatial distance join between polygon and points using R?
7
How to compare spatial patterns (crime cases vs population)?
1
How to compare multiple spatial point patterns over a polygon
4
Is there a statistical test to calculate difference/similarity between two sets of lat/lng data points?
1
Check if two different class points fall within the same cell of a grid?
2
Point values obtained from rasters with different extent, projection and resolution
1
Comparing the strength of spatial autocorrelation of two datasets on the same studied area