I'm trying to run a script tool in Arcmap that will reproject a number of shapefiles from the source data folder and place the newly projected shapefiles in a destination data folder.

I'm getting the following error 000732 with my arcpy script: 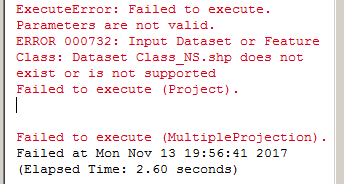 Here is my script (the error is coming from the final line):

The shapefile most definitely exists.

Does this mean it is not supported?

It's just a regular shapefile.

There may be errors with my code but so far the error message is not code-related.

You just need to include the root path with the shapefile "file" name. os.walk returns the root and then either the directory or file for every element in each folder - meaning that for each file variable in the loop, the name is only "somefile.shp" without any path information, which arcpy needs to process. So an additional line will get this to work as intended:

Not the answer you're looking for? Browse other questions tagged arcpy arcgis-10.2 error-000732 or ask your own question.