I am trying to generate a map in Qgis which makes it possible to see the temperature of a region during a heatwave. This was a great succes. However, I want to add shades as well, since shades lower the temperature.

Now I have the following map: 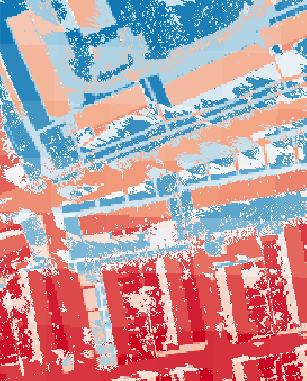 On this map we see a part of a city, with red being warmer and blue beging colder. Tree shades for instance make some parts of a street cooler. As you can see some area's have become very pixel-ish. I would like to smooth this map a bit so that for instance one orange pixel within a group of blue pixels, takes over the value of its neighbour and turn into blue as well.

Does anybody has an idea for this?

After some googling I found the SAGA Gaussian Filter in the qgis toolbox. After filtering the raster, a much smoother raster came out.

2
Contour Polygon Alternatives on QGIS
2
Is it possible to use a Gaussian kernel over a polygon layer?