We have 100's of shapefiles for which we have to generate excel reports based on a few (combination of) parameters in the attribute table. I am using SQL query to achieve this and when I run the query in the "Create Virtual layer" process, it works fine and the output has been generated, which will be saved as an excel file. Instead of this process, I am trying to run this through the Python console. Though the code didn't show any error, the output is not being printed. Do I have to change the SQL query format in the code?

Image 1: For the shapefile final_bdry, Total_Area has to be calculated based on two other columns - MS_Area, Ground_Con (similar to Pivot_Table in excel, the sum of a column based on a unique count of the other two columns). No issues with the query and I am getting the desired output in the virtual_layer.

Image 2: But, if I run the same query within the Python console, the result is "None"

You could try directly inserting your SQL query when creating a Virtual layer: 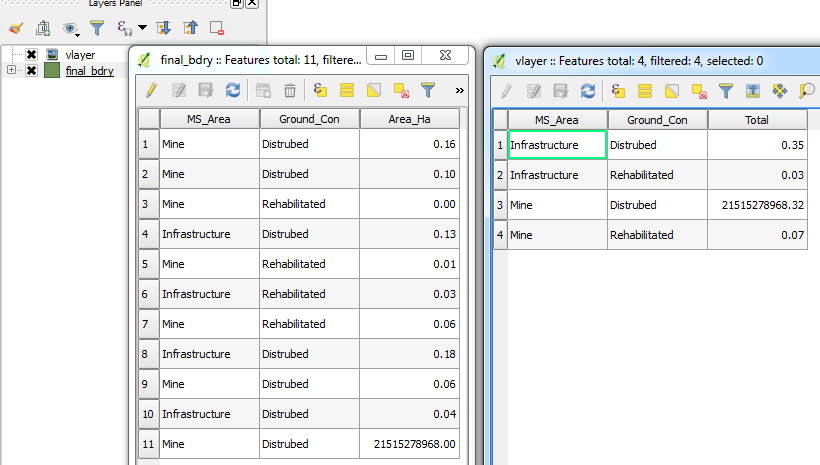 QgsMapLayerRegistry object was changed in QGIS 3.0 for QgsProject. So, last line in 3.0 should be:

Not the answer you're looking for? Browse other questions tagged pyqgis sql qgis-2 virtual-layer summarizing or ask your own question.

5
How can I print the text of help(some_method_class) in my QGIS plugin?
2
Copying code generated when you put data into GUI via QGIS Plugins?
1
Add a filter Filter to SQL Query based on geometry generated on-the-fly
3
Selecting features in an ArcGIS attribute table based on values of other features in the same table using SQL
0
Converting/ translating Excel Formula in SQL query
6
Summing values in one field using PyQGIS
1
QGIS Virtual Layer SQL Query sum if