Clicking through one layer onto another in Leaflet?

I have a map with a polygon layer and a marker layer. They are both derived from GeoJSONs, which are identical in every way except for the geometry (the marker layer is simply the centroids of the polygon layer). I currently have some functionality for the user to click on the polygon layer, and the selected polygon is coloured, added to some tracking arrays, and some summary information derived from the GeoJSON layer is displayed elsewhere.

The problem is that the associated marker layer is quite large, and makes it annoying to click on the polygons. (See image below) 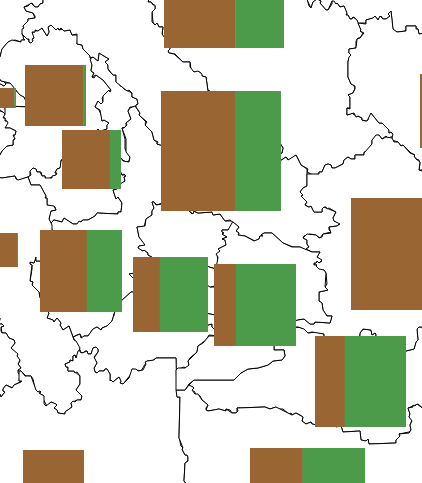 I am aware of the fireEvent method in Leaflet, but I cannot seem to figure out a way to use it to send the click coordinates to the polygon layer. Has anybody done something like this before, or perhaps have a better approach?

By the way, I have already seen Trigger a click event on a leaflet map? which appears to be the same, but if you read the accepted answer, the author was simply overcomplicating a routine task, and so the question of "triggering a click event with coordinates" was never actually answered

This is the code I am working with now, it doesn't work, but I can't find any working examples of passing a click to a layer:

I had same issue myself. When creating point, add interactive: false. The click ignores marker and picks up underlying polygon

This inability to handle the covered layers seems to be because of an known issue of leaflet:

This is definitely an issue. Adding any kind of canvas layer blocks events to any other layers below it in the stack 😞

There is an event forwarding PR (#6012) that was previously considered but needs further work.

There is a leaflet plugin for forwarding events to the layers below. Using leaflet-event-forwarder.js from its dist folder, and the following code, I was able to get the covered layers respond to click event:

Not the answer you're looking for? Browse other questions tagged leaflet or ask your own question.