Ask Question
Asked 3 years, 10 months ago
Active 3 years, 9 months ago
Viewed 351 times
0
Closed. This question is opinion-based. It is not currently accepting answers.

I have multiple (381) high resolution GeoTIFF's (2x2 meter resolution, 1 band, 700 MB each) that I somehow want to upload to a PostGIS-server to be able to run ST_intersects or ST_3Dintersects queries to. I need the resolution preserved since every 2x2 meter square holds a height value in meters that new buildings can have before they are visible from a number of cultural heritage places. And to be extra clear the desired intersect operation I want to run is in the z-dimension, not only based on the coordinates. Ideally I would like to be able to create a polygon shapefile with a z-attribute for a planned building and run a st_intersect query to see from which of the 381 points the new building would be visible from.

When asking about this at Stackexchange before, the question got closed because it was to broad(which it indeed was). One user questioned the need to load the raster's to postgis when the footprint of the image was all I needed. Since then I've been trying to understand what a raster footprint is, but I'm not sure I've figured it out yet:

I've tried to Polygonize a raster with QGIS (Raster>Conversion>Polygonize) which worked and stores the z-values I want to use BUT the vector version of the 700 MB GeoTIFF takes up 4,33 GB of storage. So I'm guessing this approach is even worse then uploading the raster straight to PostGIS with raster2pgsql? So I'm guessing this is not what the user had in mind when suggesting footprints as a way forward?

I've also tried a plugin for QGIS called Image Footprint which from the plugin description sound like just the plugin I need:

This plugin create a catalog layer from directories of images, how a memory layer, where each feature has metadata and footprint of a image. See presentation in http://pt.slideshare.net/LuizMotta3/qgis-ibama-imagefootprint

But none of the above results from this plugin gives me any actual info from the 2x2 meter cells in the original raster. Although the attributes contain a path to where the actual raster is stored on the hard drive. So this can not be the way forward either?

My question is how would you store these high resolution GeoTIFF's on a PostGIS-server to be able to run the above mentioned st_intersects query with the fastest possible performance?

Metadata from one of the rasters: 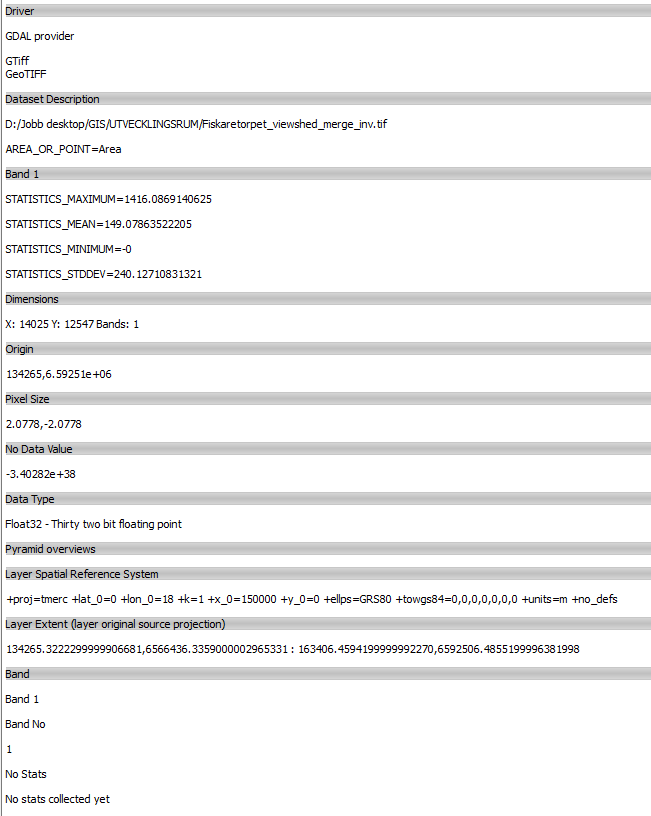 I'm not sure why you've been told to upload the footprints.

If your elevation data does not overlap, you can upload all the rasters into one big table, and it will probably be fast enough.

To load your data into Postgres, you need to use raster2pgsql. See this documentation.

The first time you do this, you'll want to use the default -c flag, and then subsequent data should be loaded with -a to append.

It's a pretty big job, and there's a lot of tuning you can do. For example, when you store raster data in PostGIS, the loader tiles it up for you. I ended up using a 20x20 cell grid for the data that I loaded. And this way you have a row for each 20x20 'tile'. You create a spatial index on the bounds of each tile, and then you take this into account when you run a query. I.e., you select out the values at a lat/lon from a tile that intersects those lat/lon to get a single discrete value. Or you select all the tiles that intersect an area and merge them together into a TIFF to grab a subset out.

Not the answer you're looking for? Browse other questions tagged qgis raster postgis-raster footprint or ask your own question.

3
Can PostGIS return a list of filenames to rasters that intersects with a vector polygon?
1
Seeking solution for PostGIS raster 3d intersection?

1
polygon to raster - not all polygons rasterized
4
Selecting all pixels above a given value in a raster in PostGIS
1
Difference between PostGIS ST_Intersects vs '=', QGIS and ArcGIS 'select by location'
2
Interpolating OS terrain data - national grid reference NU
2
Generating world files for a set of non-georeferenced rasters using QGIS?
1
Merge two rasters with different resolutions caused by masking of areas