How to create a convex hull in R based on the larger of two shapefiles' extents?

In R, I have two shapefiles: Shapefile A represents roads (polylines), Shapefile B some location (points). I want to plot the convex hull enclosing the study region, and it has to be set to the larger of the extents of the two shapefiles.

To produce the convex hull, I use the gConvexHull function (out of the rgeos package) within a function I have written, which preliminary checks which of the two extents is larger using a simple if/else evaluation:

It seems that the extent of the polyline shapefile is actually larger:

The details about the two extent are as follows:

This should imply (at the best of my understanding) that the points should all fall within the polylines' convex hull. Yet, I cannot understand why some points fall well outside the convex hull based on the polyine extent (see image). With teference to the image attached, I am quite happy with the convex hull, but I would like it to be larger toward south-est, in order to include the few points left outside. 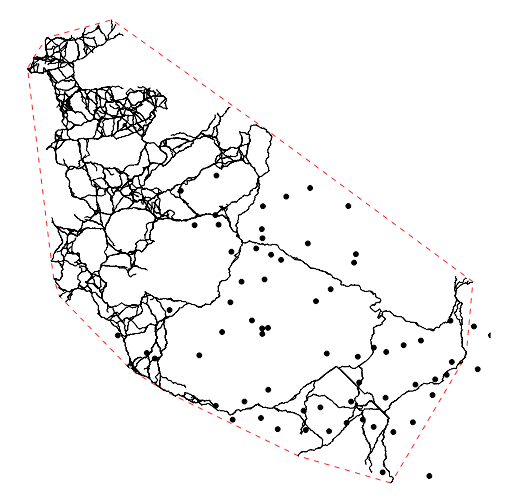 I found a solution, which is along the lines of what @Spacedman suggested in his comment. I used the union() function out of the raster package.

where ch is the final convex hull, which is the logical union of the convex hulls enclosing each individual shapefile. As already mentioned, gConvexHull is a function of rgeos package.

Not the answer you're looking for? Browse other questions tagged r convex-hull or ask your own question.

2
Wrong projection high quality shapefile for the coastline of Helsinki region (Finland)
4
Reprojection of shapefile in R and final extraction of values
1
Set projection (netCDF) with R-ncdf4-Package
2
Need to extract rectangle coordinates from a shapefile
1
Create convex hull over DEM
1
Export RGB data (from a tiff image) in excel format
0
Joinn shapefile attribute ID to point in R
0
Raster extent based on SpatialPolygonsDataFrame generating incorrect extent
2
How to extract min / max values from a raster and store them in new objects in R?