Can QGIS preserve layers when exporting a PDF? [duplicate]

I saw this posted about a year ago (Can QGIS preserve layers when exporting to PDF?) but figured it was worth asking again -- is this possible? My usual workflow with ArcGIS is to export to AI then edit the layers that way, is there some way to do that from QGIS? Now I just get everything in one huge layer. Thanks.

See if this helps with the Illustrator part of your question:
Losing large portions of elevation contours from QGIS to PDF

Short answer on QGIS layers to PDF layers support, not yet. My guess would be some form of support might show up by way of the GDAL/OGR providers.

While the version 2 GDAL driver and OGR driver have model-tree layer support for writing PDFs, it's not the same as 'regular' PDF layers.

Sample of Model-Tree (not produced with GDAL/OGR) 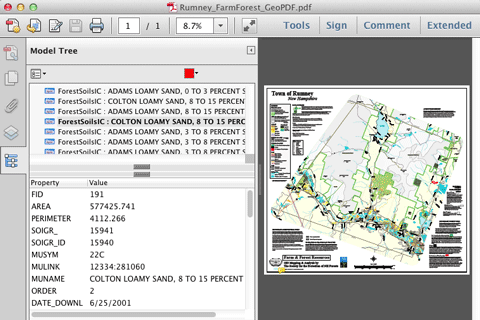 The GDAL driver appears to have support for layering an OGR data source over a raster layer (see OGR_DATASOURCE).

Here is some recent discussion on the subject:
GDAL - Dev - [gdal-dev] Geospatial PDF with OGR_DATASOURCE

There are other libraries, like Cairo and Poppler, but I don't know if anyone is integrating them with QGIS.

You could try to export it as svg using the simple svg plugin. It keeps layers intact. Then Import the svg in AI. You could then save as PDF from AI if that is your final format.

Not the answer you're looking for? Browse other questions tagged qgis pdf layers illustrator or ask your own question.

34
Can QGIS preserve layers when exporting to PDF?
2
Losing large portions of elevation contours from QGIS to PDF
2
Vector objects "merged" in PDF with QGIS