I then clipped out everything that wasn't DTLA by subsetting

Then I go to get the DTLA map using ggmap.

The map that appears is correct, but the latitude and longitude are warped. The latitude range is 29.74 to 29.78 and the longitude range is -95.39 to -95.34. So when I try to plot downtown.df on top of it, it doesn't display because the coordinates are off.

The polygon for the DTLA shp file is in the WDS84 system and I assume the Google Maps is too, or it wouldn't have pulled up the correct map...?

I looked at this google group answer here but I can't get the solution to work for me using get_googlemap.

One thing, you can't use downtown.df[downtown$slug="downtown",] because dim(downtown) != dim(downtown.df). You need to select before fortify. Also, shapefile came in NAD 83, so you need to reproject it:

Second, get_googlemap function uses center argument, not location (this one is for get_map function) and third, ggmap doesn't work fine when the polygon is bigger than extent, so use zoom = 13 (or you can cut polygon with extent of zoom = 14): 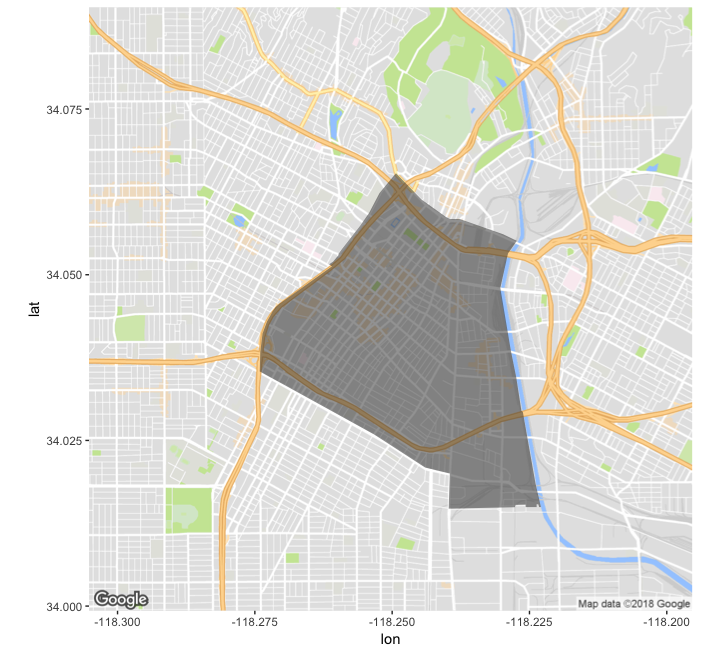 Not the answer you're looking for? Browse other questions tagged r ggmap or ask your own question.