I am creating a model to remove features which are duplicated within a polygon feature class. Most of the features are duplicated once, but about a quarter have up to three or four exact copies. I do not have ArcInfo, so I cannot use Delete Identical.

My model should contain the following:

I have finished all the steps except step 9. I am not sure where/how I should increment the counter. I'm also not sure if I should put a Copy Features tool somewhere before the while loop as a backup mechanism since this model will be modifying the input data, and not everyone will make a backup of their data before running the model.

You should try this, Add XY coordinates to your featureclass, then Dissolve on the X,Y fields. This should remove your stacked, duplicate features. You can then join the attributes from your source file. You may need to concatenate X,Y to form a single field for the join.

Here is a model that looks like it duplicates the process you have listed above. There are a couple of things different than the procedure you have outlined above.

Instead of using a while loop to increment through the features, there is a Feature Selection Iterator that loops directly over the features in a featureclass. What is nice about this iterator is that there are two outputs, the selected feature, and an attribute value of that feature. If you don't specify the attribute, it defaults to the Object ID, which is what you need to deselect the initial feature.

The value that is returned is used as part of the expression for the Select Layer by Attribute tool. It is referenced as an Inline Variable. This removes the initial feature from the selection.

The last interesting bit is the use of Feedback in the iteration. This is represented by the blue line from the "Output Feature Class", to the "Input features". This allows you to tell the input features to use the output feature class as their source, after the initial parameter definition. This removes the need for a counter to effect a loop of some sort.

I have not tested this, and there are a couple of places I am not sure of, for example the correct way to set up an expression using the OID field on the layer. This may be tricky because the field name has to be surrounded with brackets or double quotes depending on if it is coming from a personal or a file GDB respectively.

Hopefully this will give you some ideas to work with to structure your model.

Here is a link to a screenshot of the model: Remove Duplicates Model 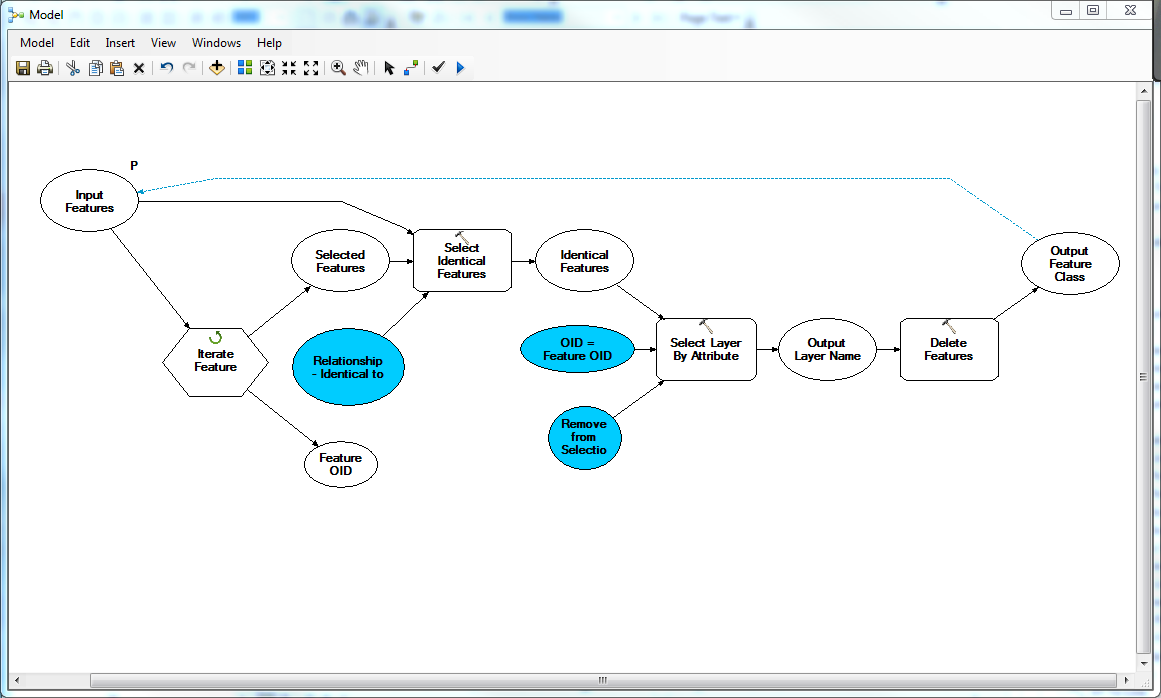 Not the answer you're looking for? Browse other questions tagged arcgis-desktop arcgis-10.0 modelbuilder arccatalog or ask your own question.

15
Removing duplicate features with same geometry in ArcMap?
6
How to find and delete identical points?
4
How to determine if all points on a map are identical in arcpy?
3
ModelBuilder routine to remove spatially duplicate features
4
Select polygons contained inside a polygon and assign ID
2
How to add points to line at every polygon/polyline intersection and have attribute table including distance of new line sements