Creating line between point and all other possible points using FME

I'm interested in creating this information so that I can identify the shortest possible route between two buildings based on a pedestrian network layer that runs throughout campus. After creating this information, my idea is to use the lines between all possible buildings as input into the From-To port in the ShortestPathFinder tool. However, I'm open to other suggestions on how to approach this problem/suggestions on other tools to use.

Also, it might be worth noting that there are 300+ buildings on the campus, so I'm uncertain whether the methodology that I devised above would not work since there would be so many possible building combinations.

My preliminary FME workspace is below.

Funnily enough I did exactly the same thing, except this was for British football (soccer) teams. I wanted to figure out the shortest distance between each of them to see which team's supporters had the longest journey.

There are only 20 teams rather than 300+ so you might find it takes a bit longer for you to run. But I don't why it shouldn't work.

Basically what I do is merge the features onto each other, so that each object has a list of the other objects. Then I just explode the list and turn it into a line feature: 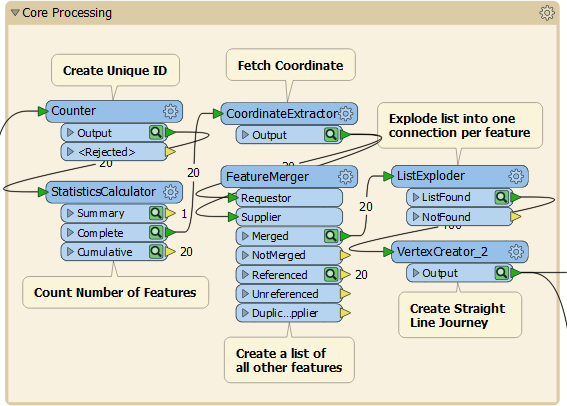 The output I then send into the ShortestPathFinder, using Ordnance Survey roads data as the network.

So, download the workspace from that blog article (or a direct link here) and give it a try. Just run it first (the data is included) and see if it's producing what you want.

At best you might then be able to just feed your building centre points directly into the workspace. At worst you'll need to do a small bit of editing, but I don't see much work involved.

NB: If there are any football fans interested, in the 2015 season, Aston Villa fans had the shortest accumulated journey over the season. Newcastle fans had the longest. The output looked like this: 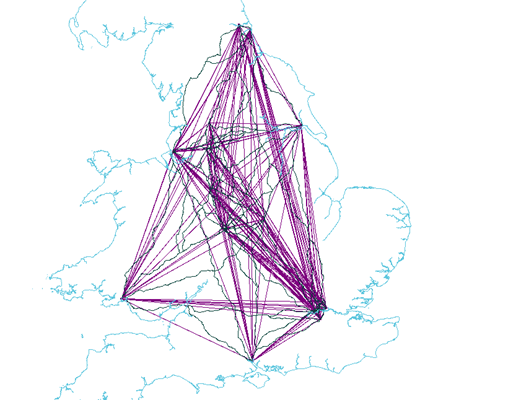 Not the answer you're looking for? Browse other questions tagged fme network or ask your own question.