I have several point shapefiles containing different occurrence data for two different species of flower (from multiple sources, hence the multiple shapefiles). I want to create a buffer from a central point that includes a quantity of at least 50 each of each species. I'm familiar with the general buffer tool, so for example, I can create a buffer of a certain size and clip to it, but what I'm hoping to do is create a buffer that contains at least 50 occurrences of each species regardless of the size, from a certain point (i.e. a city).

I'm hoping this can actually be done in ArcMap? I've been searching Stack Exchange and elsewhere, and can't find this anywhere.

I've attached a screenshot of what the occurrence distribution looks like. Attribute tables consist simply of long/lat values. One of the species I am studying is protected, so I can't get more detailed than that. The primary study site is a natural area just outside of a major city, so we chose the city as an arbitrary "central point" to create the buffer from.

As of now, I have eight sources providing occurrence data, so eight different point shapefiles, that I created - so they should all be the same. I have an "Advanced" license, and the following extensions: 3D Analyst, ArcScan, Geostatistical Analyst, Network Analyst, Publisher, Schematics, Spatial Analyst, Tracking Analyst. 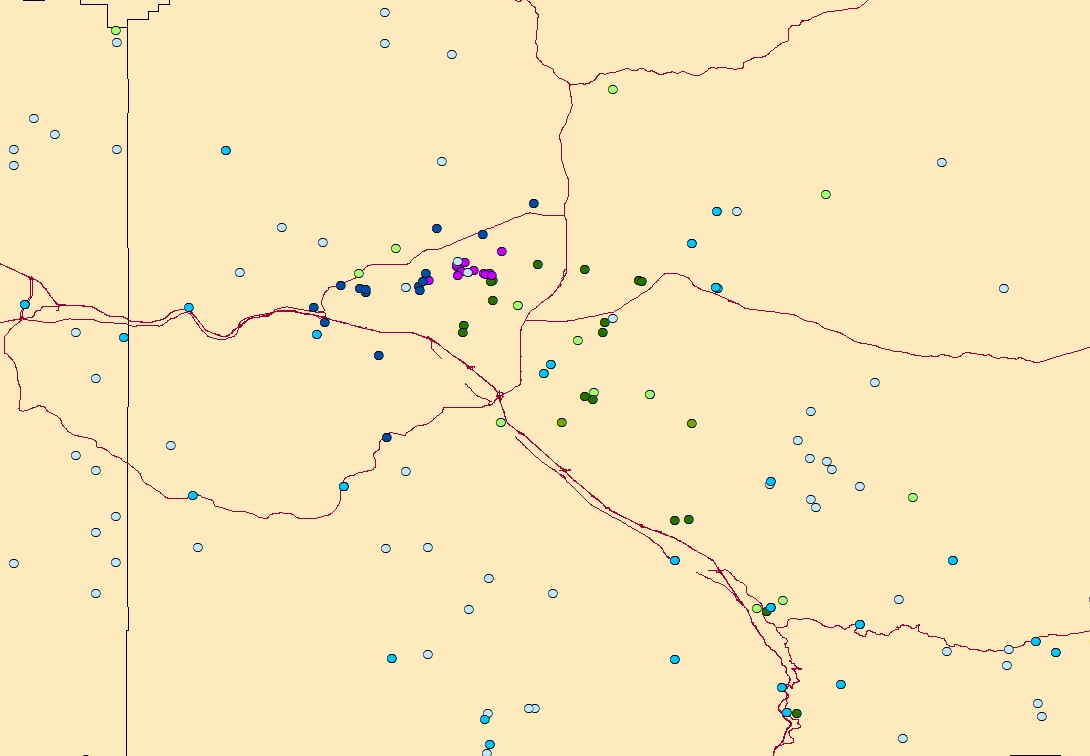 I created a Tool a while back which I was using to find people in proximity to boreholes. Tweaking it I have something you can use.

Create a text file and save it as "Species.py", copy the code below into it. The code is messy, as it has been butchered from my old code.

Once copied into the *.py file, save it.

Open ArcMap and Open your "Catalog" window. Scroll to your working directory and right-click on a folder where you can save a Toolbox. From the right click menu select "New" then "Toolbox". Give it a name. Then in this newly created Toolbox, right click and "Add a script".

Give the script a name and fill in the details as you wish. Click next. Where it asks for a script file, choose the *.py you just saved.

The next screen is VERY important. See below: 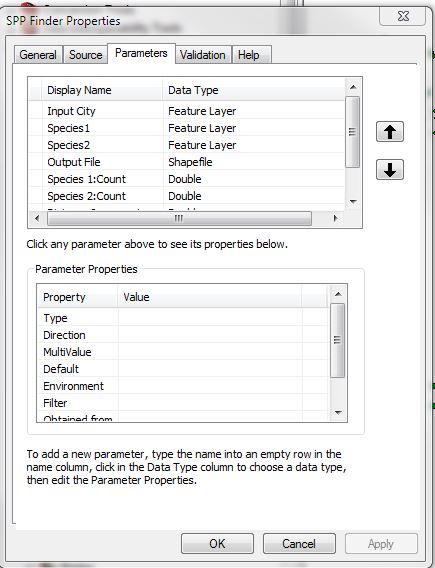 Once you have set up the Toolbox, double click the Tool. Select your input point (the point from which you want the buffer drawn). This can only be a single point, do not use a point file with more than 1 point. I haven't tested it on a selection, but there is no harm in trying.

Select where you want the output buffer saved

Notes The dataframe and all data within the map must be the same projection. The units of the project must be a distance unit - I use the metric system, so I have only tested this with metres. The final output may be off by 1 or 5 counts. This is due to the increment of the search distance.

Use this as a starting point at least.

One option could be using spatial analysis toolset. You can first convert your points to a binary raster where there is any occurrence of species it gets 1 and you can use Focal Statistics tools by SUM operator. Then you can test your proximity definition (i.e., neighbourhood), which would be circle until you find the maximum value of 50.

I assume you'd like to pick minimum distance from town that will contain at least 50 birds of each specie. I suggest using NEAR (analysis) tool for that. 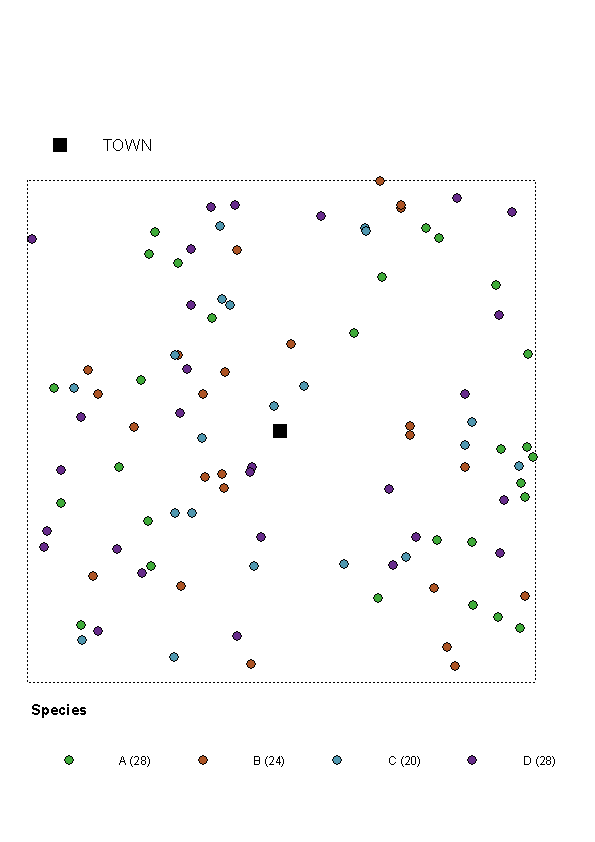 Use field calculator from here to populate above field by sequential number for indiv.specie.

This is your answer (5 birds at least in below example): 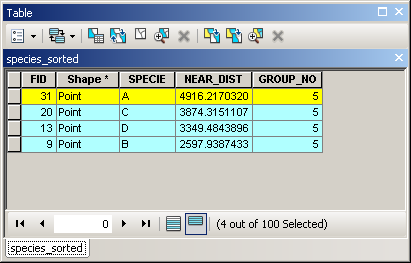 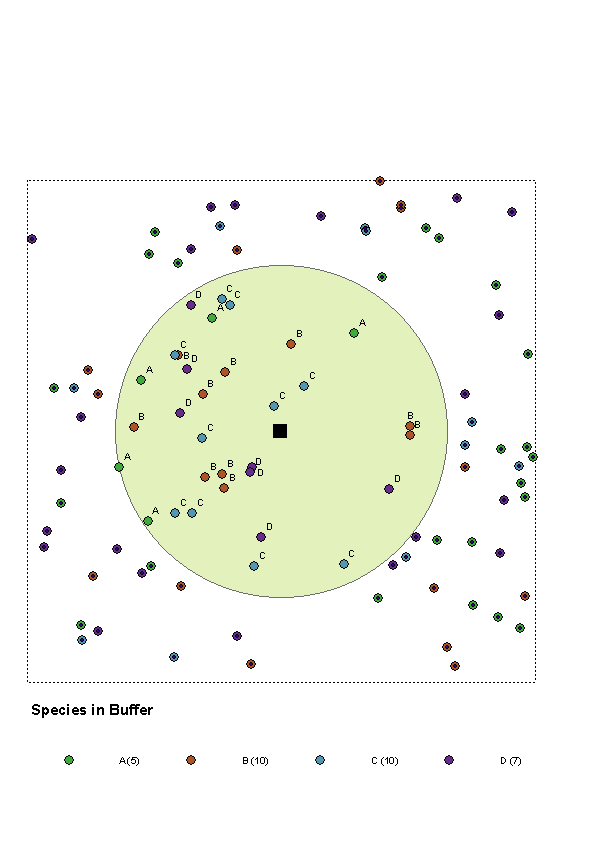 2
Using field as input for multiple ring buffer in ArcGIS Desktop?
4
Remove duplicate feature based on Condition
0
How to sequence points for GPS collection?
0
Increasing size of buffer based on field in ArcGIS for Desktop?
1
Creating buffer rings of equal population size using ArcMap