How to create a grid whose vertex coordinates are shown on an attribute table in Arcmap?

I have a specific area to study. Before starting on my field work, I have to create a 310m X 310m grid of the area. Later on I have to get the coordinates of each point of the grid in an attribute table (each angle of each square!). I tried fishnet; but first, it does not cover the area exactly (there are a lot of rectangles outside of the study area); second, when I tried to get the x, y coordinates, it gave an error message (the calculated value is invalid for the row with ObjectId=0...); and third, the output shows the centers of each rectangular polygon, which I do not need.

I am a newcomer to the field, so any help regarding my problem will be deeply appreciated. (I hope I have narrated my problem well.)

This question comes up often. Every GIS seems to have an add-on to solve it, but they tend to be limited in what they can do. (E.g., many will only create square grids of points parallel to the coordinate axes.) I would like, therefore, to describe a simple general way to create regular grids of 2D points, suitable for use in any GIS.

Surprisingly, most of this is not really a GIS calculation: a grid can be computed even in Excel (although this is best done in a repeatable (that is, scripted) way). Then, use the GIS to select the grid points that lie within your study area. (To capitalize on this, stop right now and create a polygon feature within a feature dataset to represent the study area. Use projected coordinates in meters so you can match the metric specification of the grid.)

(Why use this generality? Because you can create grids of any orientation. It is not often in the field that you have the luxury to lay out grids exactly along coordinate lines. For sampling, you might want to use a random grid with random orientation, for instance. This generality also allows you to use grids of rectangular cells (make the steps different lengths) and even triangular cells (orient the row displacement 60 or 120 degrees from the column displacement).)

All that remains is the arithmetic. As you can see, it's basically multiplying the displacements by the row and column indexes and adding them up. However, it's convenient to specify a grid in terms of (a) the coordinates of its origin, (b) the sizes of the steps, (c) the orientations of the two step directions, and (d) the numbers of columns and rows. Converting from this specification into the vector displacements needed involves computing a couple of sines and cosines; that's really the only complication.

One disadvantage of a spreadsheet solution is you either need to write a rather general macro or else you need to set up the worksheet to match the total number of points generated: not hard, but a bit of a pain. A huge disadvantage, if you're not using a macro, is the lack of reproducibility and the significant chance an error will occur.

In ArcGIS, it's convenient to script the solution in Python. In keeping, though, with the thesis that creating a grid is not a GIS operation, here is an R based solution. (R is freely downloadable and works right out of the box on many platforms, including Windows, Mac, and Linux.) You only need to edit the details (of the grid specification and output file name) and run it to create the grid attribute table. 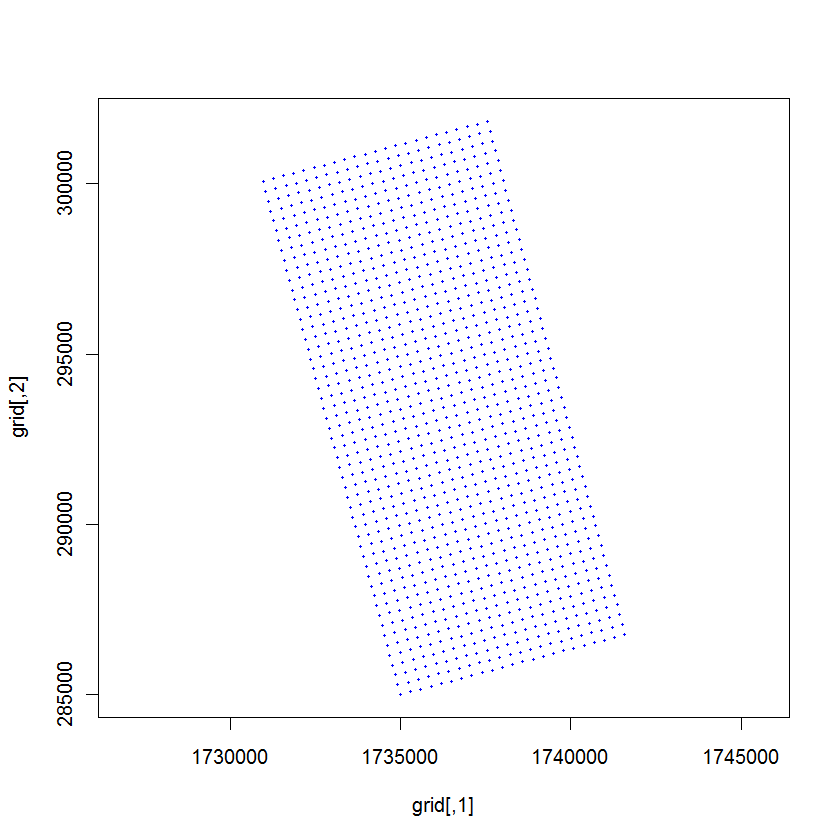 Remaining true to the philosophy that software should be used as appropriate to each task, and bearing in mind that R is not a GIS (even though it can be persuaded to do the final steps), it's time to use ArcGIS (or any other GIS you are comfortable with). To finish up, add the output file as a layer, convert it into a point layer via the "Display XY Data" option in the pop-up menu, save that as a shapefile (to make it selectable), and use Selection|Select by location to select all points within your study area (which is easy, because you already have a polygon layer representing your study area, right?). You can export the selected points if you wish.

BTW, after adding the output file as a layer, you can modify the R script (use R's built-in script editor) and re-run it (use ^R in the editor) to change the grid. Refreshing ArcView's display shows the new results. (That's two mouse clicks: run script, refresh view.) This is a convenient way to play with the parameters to assure the grid totally overlaps your study area.

If you need a random grid, merely change some of the initial specifications in the R code to use one of its (many) random number generators. For example, using

will produce a grid with a random orientation. (Setting the random number seed gives reproducible results.)

Incidentally, as a practical matter, things rarely happen in the field exactly as they appear in the GIS. Here, it's likely that some of the points that seem to be outside the study area turn out to be inside it. It's a good idea, then, not to limit your table to just those points selected by the GIS, but also to include a buffer of points that seem to fall just outside the study area, too, just in case they turn out to be needed :-).

To get coordinates of your grid vertexes you have a couple options:

Using ArcGIS Toolbox use the Feature Vertices to Points tool

Using ET Geowizard within ArcMap use the Polygon to Point tool.

You can then generate the XY coordinates using the Add XY Coordinates tool for each point feature.

Taking a bit of a leap of faith here, but if you are looking to calculate the extents of each feature in a feature class, you can try the following:

It has a command called "Generate Vector Grid" and it's very self explenatory and easy to use. It can also generate a shapefile. You can use the extent of the polygon to generate the grid.

Not the answer you're looking for? Browse other questions tagged arcgis-desktop vector-grid or ask your own question.

2
Adding values to Fishnet Grid?
2
How can I generate a fishnet grid and a matrix of percentage of overlapping in R?
3
create polygons and fishnets of specific size and orientation and buffers
4
Creating fishnet where each point from point file is located in middle of individual grid cells?
1
Rotating fishnet made of minimum bounding boxes?
0
Correlate German CDC-Data with 1km x 1km Grid
0
Splitting up polygon with grid using QGIS