In the top-left you can see the Europe coastal line I was using, in the bottom-right the nc layer 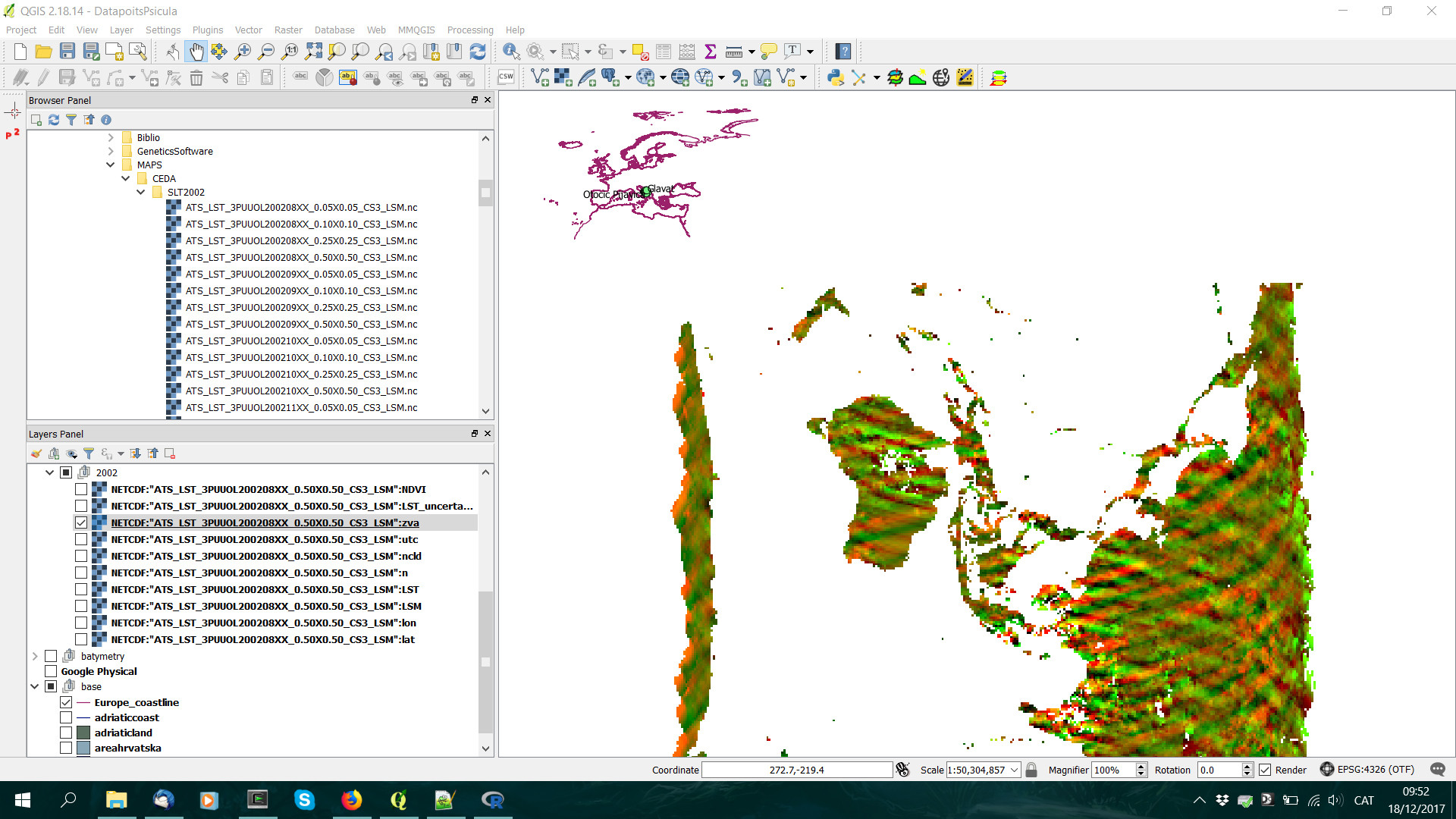 When importing them to a friend's ArcGis I can choose which subdataset I want to use as X and Y coordinates, there are four candidates: lat, lon, nlat and nlon. After some trials and errors I finally got it right in ArcGis, but in QGIS importing it (Layer > Add layer > Add raster layer) there isn't any option to choose the coordinates.

Althought I got some warnings: 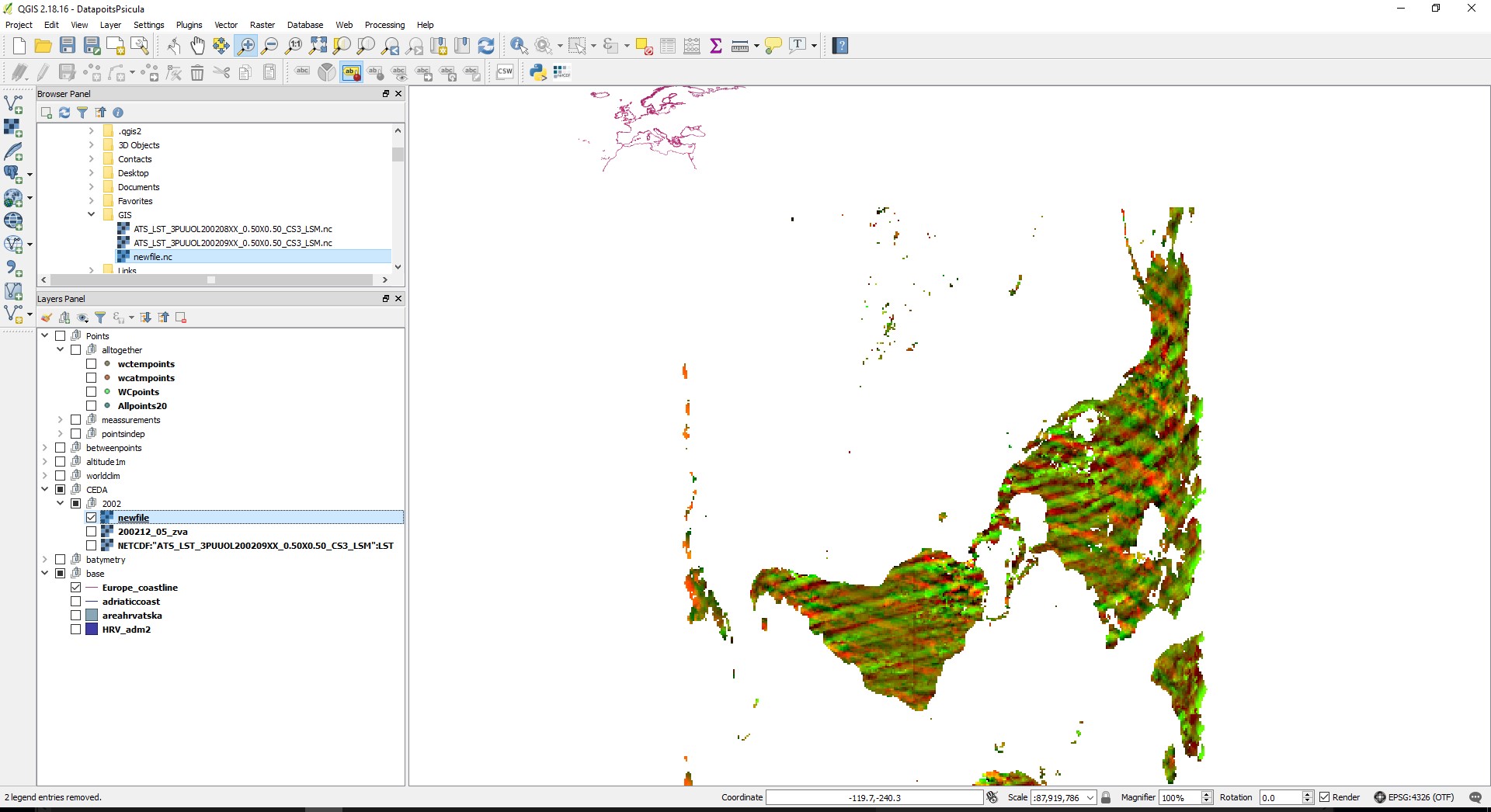 Is there a way to do this for the x-axis? I found nothing here

The QGIS raster import for netcdf uses the GDAL drivers which assume the data follows the CF conventions, and the multidimensional arrays within the data in (...Y,X) order per this:

Dimension The NetCDF driver assume that data follows the CF-1 convention from UNIDATA The dimensions inside the NetCDF file use the following rules: (Z,Y,X). If there are more than 3 dimensions, the driver will merge them into bands. For example if you have an 4 dimension arrays of the type (P, T, Y, X). The driver will multiply the last 2 dimensions (P*T). The driver will display the bands in the following order. It will first increment T and then P. Metadata will be displayed on each band with its corresponding T and P values. --per https://gdal.org/drivers/raster/netcdf.html

Your data file is in (diurnal, nlon, nlat) order, which is rotated from what the driver expects.

One way of fixing this is to transpose the dimensions to a (diurnal, nlat, nlon) order, which can be done with several tools. NCO's ncpdq from http://nco.sourceforge.net/ works well, and can also deal with flipped axes/inverted storage orders. 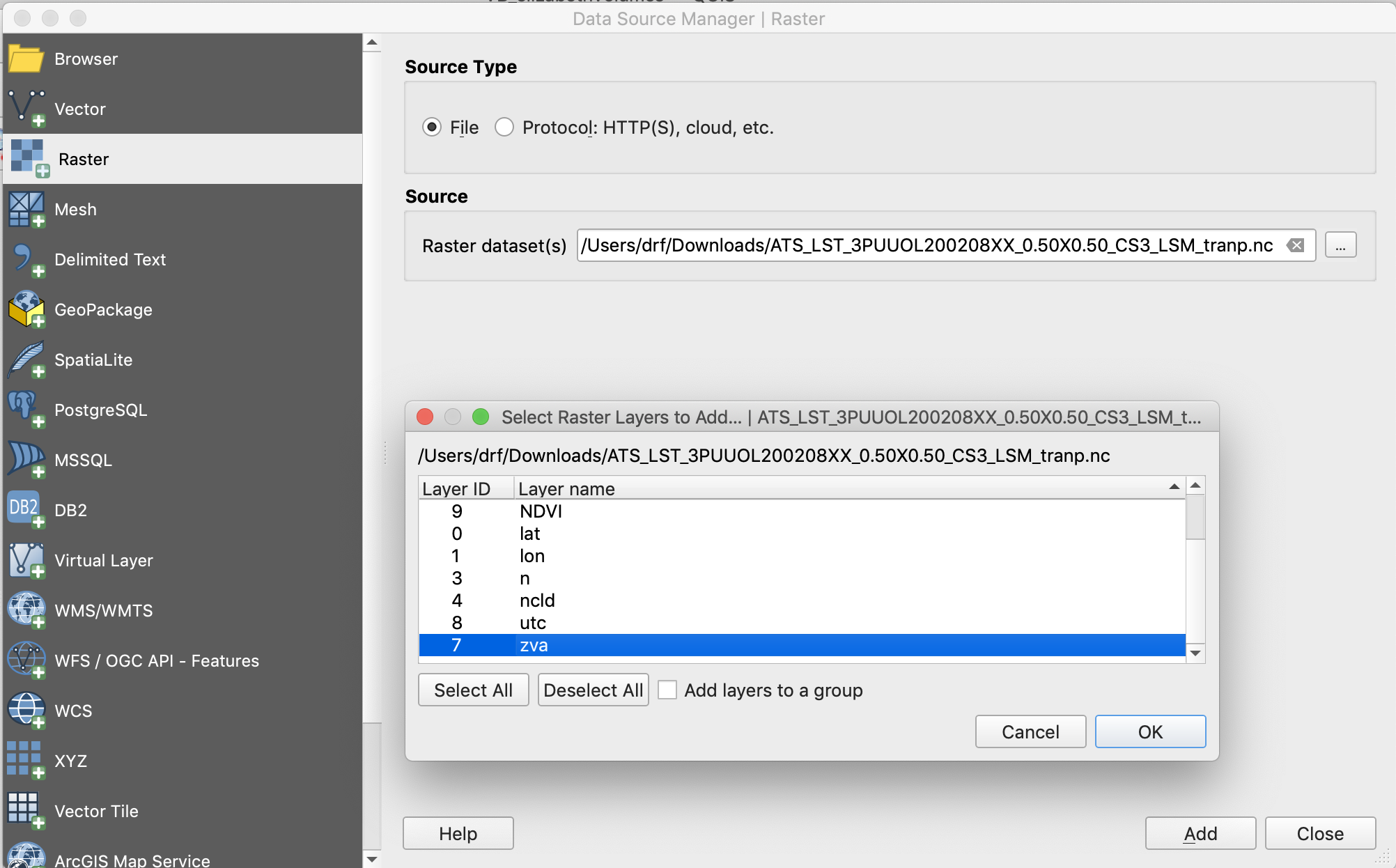 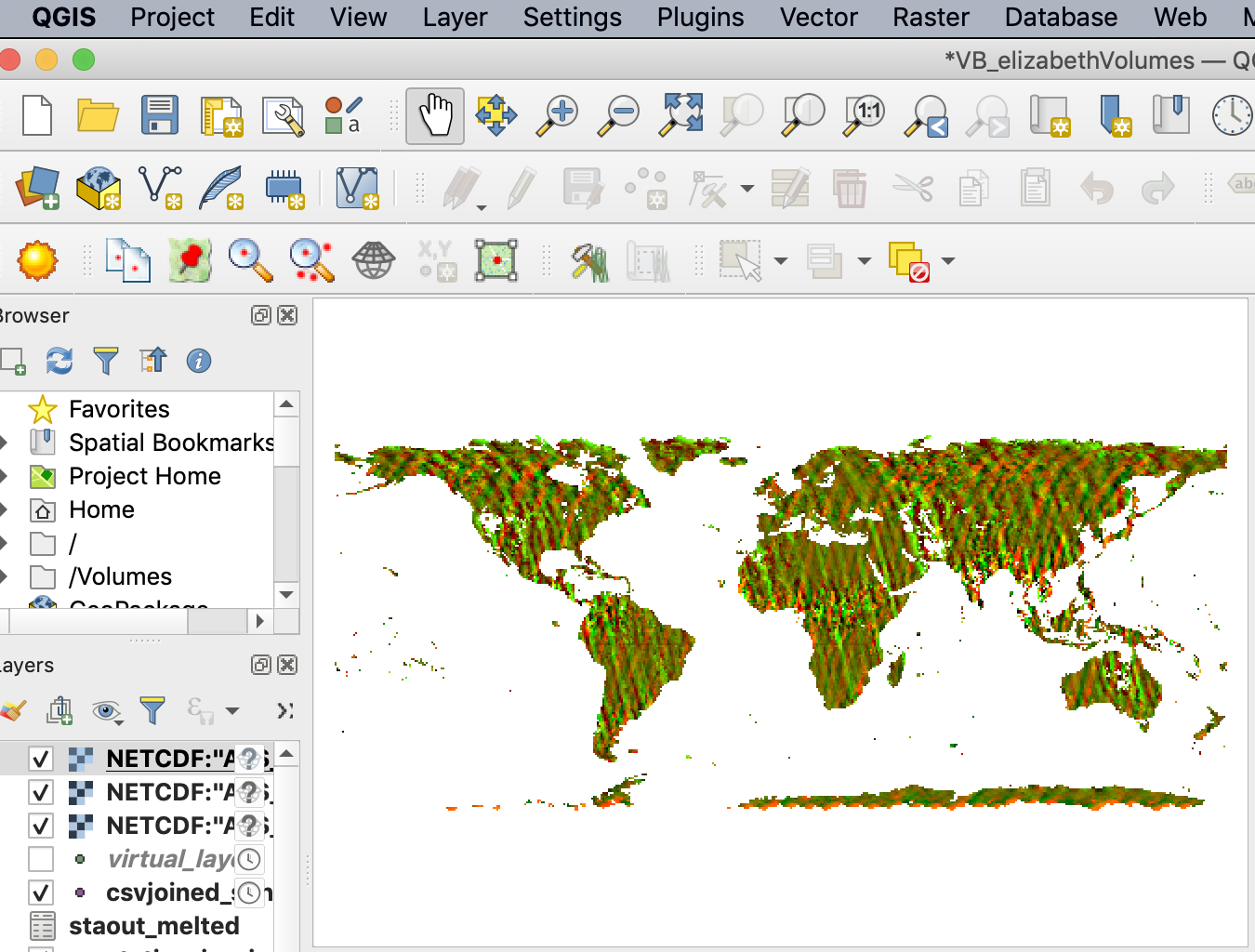 If you want to go further and georeference this netCDF file and add a CRS, per Displaying netCDF data with correct CRS? you could use two more NCO tools to add the CRS metadata, ncap2 and ncatted. Although the data contains 2-dimensional lat and lon variables explicitly mapping the pixels into coordinates, they do not map the dimensions to the coordinate indexes. Since in this case, the 2d variables repeat themselves along an axes, We'll ignore the 2d mapping and take a slice of each to map a coordinate variable to the dimension indexes with ncap2.

This command creates a crs variable in a copy of the transposed netcdf file to hold the CRS metadata in NetCDF form per the CF conventions https://cfconventions.org/Data/cf-conventions/cf-conventions-1.7/build/ch05s06.html :

Now, we'll use ncatted to add metadata attributes to the crs and the other variables to associate the CRS with the variables

After importing a zva raster, this screenshot is overlaid on an OSM basemap. 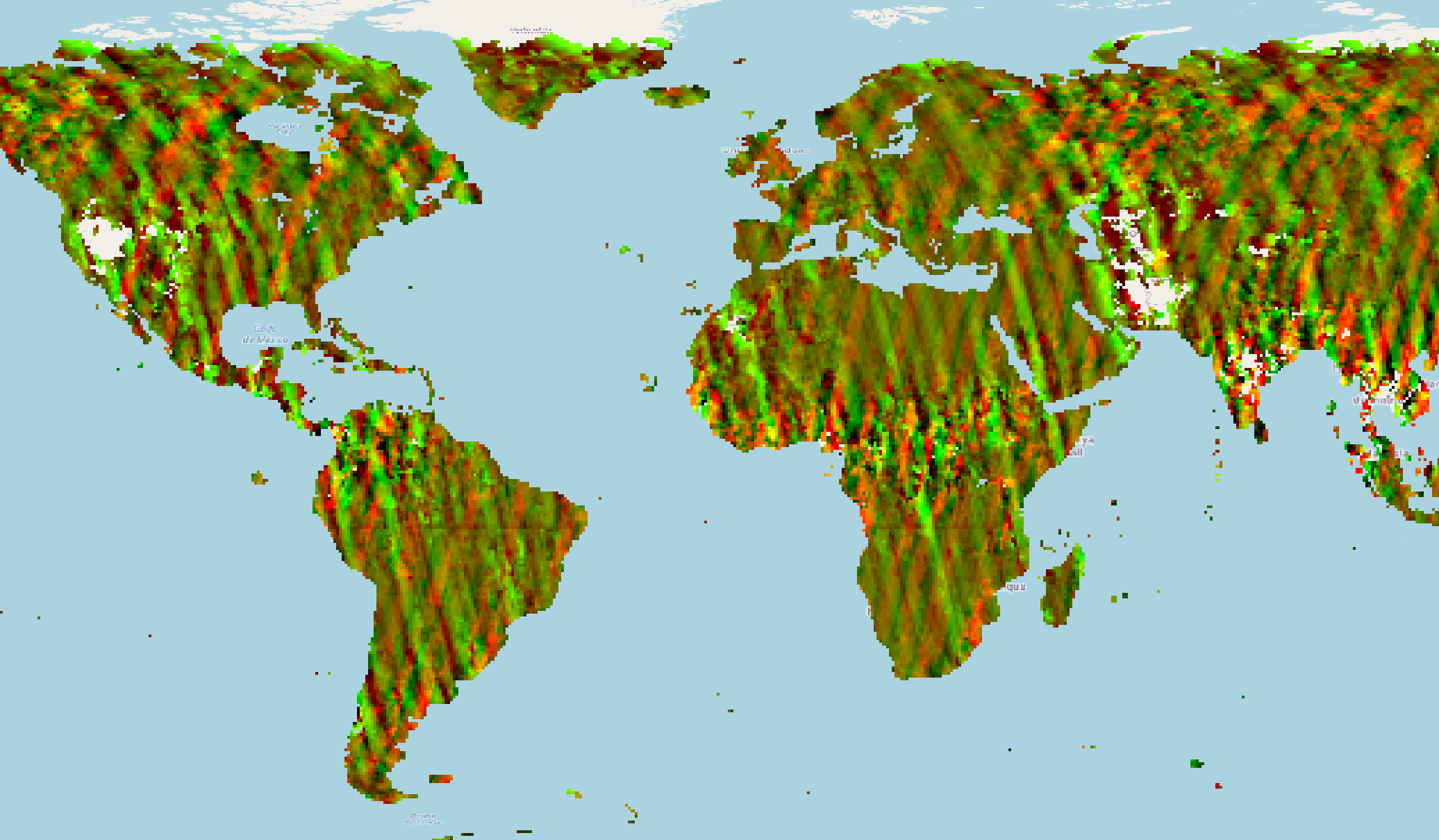 At the widest zooms, the OSM basemaps don't project properly, but at closer zooms it renders properly: 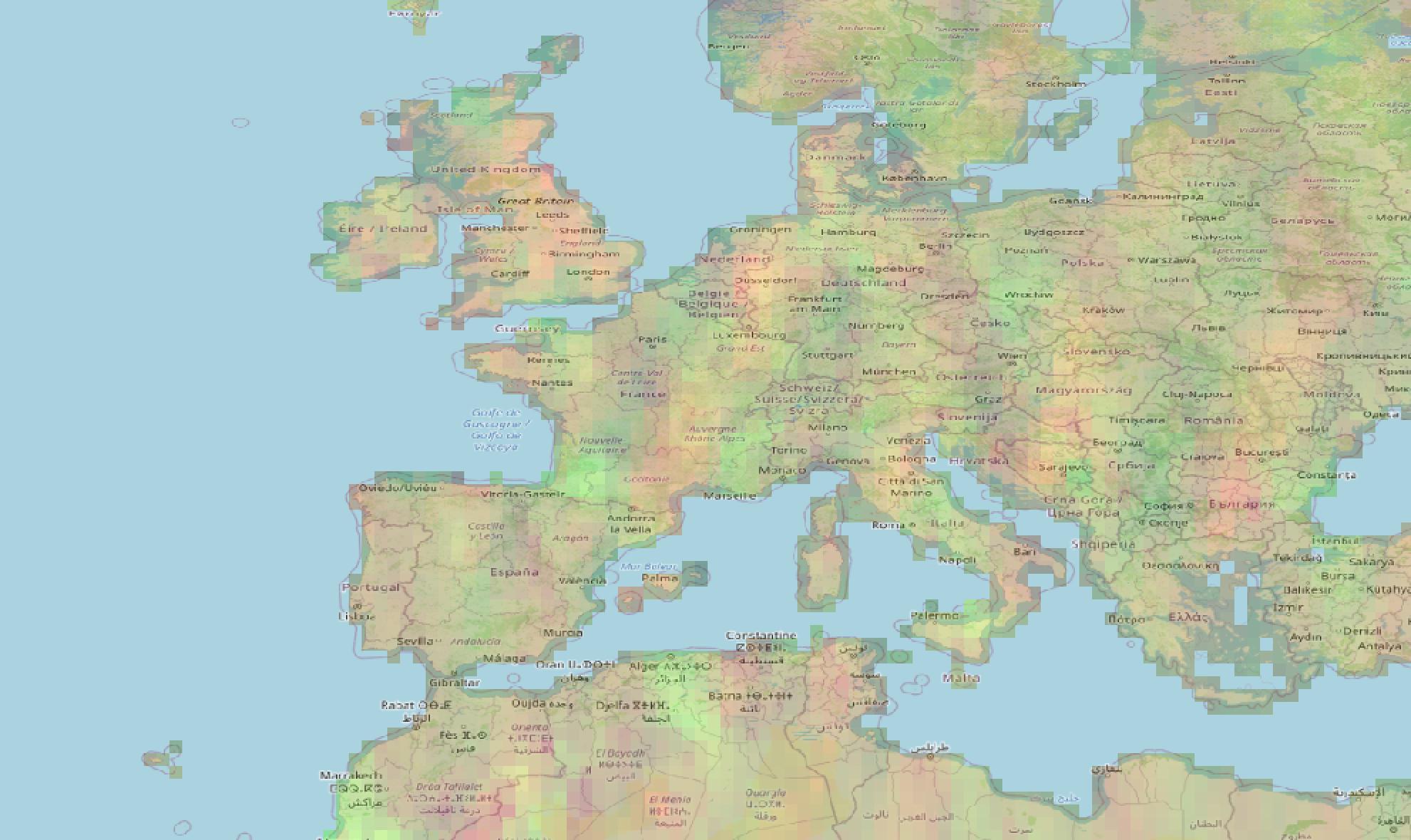 Note that the red/green diagonal striping is due to the third dimension of diurnal being represented as two bands of a multiband color plot. You could show distinct day/night levels of diurnal by choosing a singleband rendering in Layer/Properties/Symbology. In higher-dimension netCDF files, the interactions multiply into additional bands.

In R you can use rotate function

I had a similar issue which I ended up solving in python using xarray:

Not the answer you're looking for? Browse other questions tagged qgis coordinate-system gdal layers netcdf or ask your own question.