I have a point layer from an aerial photographic survey of a savanna, where each point contains information on the number of trees found within each photo. Some points can have 0 trees, while other points can have 1 or more trees.

Points representing photographs along an aerial survey. Each point contains the number of trees within each photograph

A line layer split into 1 km feature, with each feature containing a color indicating the number of trees based on the sum of trees from the points within each 1 km feature

It seems like a very easy thing to do but I haven't figured out how to do it. I tried creating a raster file that had the sum of trees for 1 km cells, followed by converting that back to points and then converting that back to a raster with the average number of trees/km in 5 km cells. I'm not completely happy with that because the flight path isn't actually straight, so it would result in some raster cells represented by just one point and have extremely high or extremely low number of trees.

Is there a way to get the final result? I didn't want to use Kernal density since I wasn't trying to depict density over a unit area, but rather along a single linear transect. I've been using ArcMap 10.3.1 so far but I'd honestly be happy with using QGIS as well.

Once you have your lines layer, perform a spatial join with the points layer.

In ArcMAP and QGIS, you can specify that the join sum field values from multiple features. 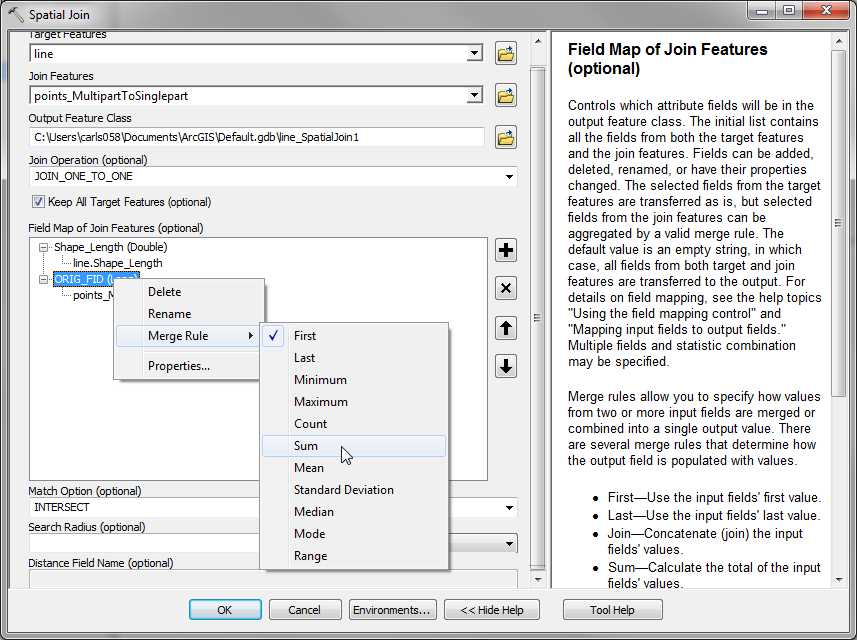 The output should now have a field which sums the point values it intersects. You can now symbolize this layer based on that field as you like.

You can repeat the above steps for your larger segments, but select Mean instead of Sum when performing the join.

Not the answer you're looking for? Browse other questions tagged density points-to-line or ask your own question.

3
Finding distance within which set percentage of features fall using ArcGIS Desktop?
1
Accessibility indication from points
2
Mapping overlapping density estimates
2
Looking for an algorithm to quickly find the closest point on a road network (or other graph)
4
Uncertainty of a line between two coordinates with uncertainties in QGIS
0
Converting Raster Density File into Point using ArcGIS Desktop?
5
Creating line from points and counting the number of points on that line
1
Hexbins missing points, layer extent problem in graphical modeler?