I'd like to use the function GroundFilter on my dataset. However, the manual says that the default values of the parameters used by this function (g parameter, w parameter) are related to a high density point cloud (> 4pts/m2).

Do you know which values I have to choose for my low density dataset (0.5 pts/m2)?

The most suitable alternative (if default settings do not work) is to simulate combinations of GroundFilter parameters until the best result is achieved. It is important to have real accurate data to compare with, though.

This is because other variables besides point density will influence in classification accuracy, such as terrain type and objects above the terrain.

You need to consider in the analysis what is the purpose of performing such classification, i.e., will the DEM be a final product which require high accuracy, or perhaps an intermediary processing step which allow some degree of generalization in it?

Also, consider the trade between having classification errors and the amount of interpolation or smoothing needed when generating the DEM.

Make sure to be running the tool with a cell size at least slightly greater than the average ground point spacing (see, here and here), so to avoid huge classification errors (see last picture from this post). On the other hand, using a very large cell size will over generalise the resulting DEM which is also unwanted.

Here is an explanation about how GroundFilter works:

It is adapted from Kraus and Pfeifer (1998) and given by the following set of equations (weight functions): 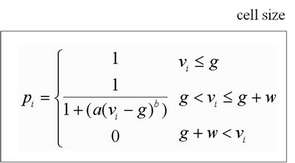 Therefore, there are 5 parameters one can work with to adjust GroundFilter: g, w, a, b and cellsize.

This is a picture simulating a calculation with the Kraus and Pfeifer algorithm with default parameters (g = -2, w = 2.5, a = 1 and b = 4). After step 3, deviations (vi) converge and no further points are discarded.

Not the answer you're looking for? Browse other questions tagged lidar algorithm classification parameters fusion or ask your own question.

10
Determining bare earth DEM from unclassified LAS file?
7
LiDAR (.las) to bare-earth DEM: average points spacing and cell size?
2
Getting a flat surface from DSM for height calculation?
1
What is the definition of pt_spacing on Point File Information tool?
-1
Can my “.las” data be classified