How do I process xy data to be compatible with census block data (so I can include them in my GWR model)?

I'm planning to do regression analysis (GWR) on several datasets, where all but one is based on census areas (UK OS lower level super output areas, lsoa) for which I have a shapefile that describes the polygons. Regression with the census-based variables is easy to set up and execute because both the dependent and explanatory variables are held within the same Input feature.

But I'm finding difficulty with my final explanatory variable - concentrations at x,y coordinates (UK OS co-ordinates). I believe I need to 'join' or 'relate' with my lsoa shapefile (which is what I've done with the other variables); I've tried all sorts of things such as kriging and extracting to vector, 'relates', 'joins', adding new fields, calculating new fields, but to no avail.

I'm sure there is someone out there who has done this before - I'd really appreciate your advice.

Coming in 10.1 you could give Areal Interpolation a shot. 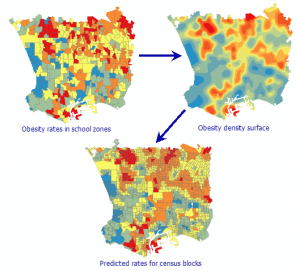 What does your XY coordinates represent? You can always try to aggregate them within boundaries of LSOAs using sum, count, mean/median, etc. use Spatial Join for that purpose specifying correct join operation(s).

The question asks about connecting point data (measurements of concentrations of a substance in samples of an environmental medium) to areal (aka "lattice") data, which represent aggregate values collected within administrative units.

The objective is to look at relationships among multiple variables. One of them is intended to be some sort of representative summary of the concentrations within each Census unit; all the rest already are attributes of the Census units. Therefore, we need to aggregate the point values to the Census unit level, not the other way around!

To do this, some thought about what the concentrations mean will be useful. Their meaning depends on how they were collected and what is important to know about the environment.

To clarify this point, consider two different situations with the same formal data. In the first one, scientists sample (say) two locations randomly within each Census area. The purpose is to obtain concentrations useful for estimating average concentrations within each area. One would want to use some average, or perhaps weighted average, of the concentrations within and near any Census area to estimate the true average concentration within that area. In the second situation, suppose scientists sample locations thought to be contaminated (such as air near smokestacks or water just downstream of industrial outfalls in creeks and rivers) without regard to the Census areas. (This is a typical application.) Their purpose is to assess extreme (not average) conditions. Due to this focused sampling, some Census areas may include many samples and some may have none. Here, averages could be meaningless (or deceptive), whereas the maximum concentration observed within each Census area might be useful (perhaps leaving Null values within Census areas without data). In other applications, distance-weighted averages of the concentrations might be more appropriate.

Other scenarios are possible, but these make the point that there is no universal, general-purpose answer to "how do I combine these data?".

Nevertheless, in many cases it can be reasonable to do the following:

The resulting attribute table now has a new column representing the points (here, the concentration summaries). It contains all the data needed for statistical analysis, whether it be GWR (which presumably would use coordinates of central locations of the Census units), ordinary least squares regression, or anything else.

Not the answer you're looking for? Browse other questions tagged arcgis-10.0 spatial-statistics or ask your own question.

3
How can I display “related” data in a polygon label?
0
How can I hide custom model from mytoolbox in ArcGIS
0
How I can merge three rasters with sum cell
2
How to get Network Analyst data from script file back into Model Builder?
1
R package spatstat: How to use point process model covariate as factor when pixel image values are numeric
2
Creating DTM for two surfaces with point data and calculating volume between them using ArcGIS Desktop?
1
How can I calculate community populations with CIESIN / Facebook's new High Resolution Settlement Layer data?