Why North direction is shown in red color on aspect maps?

I have been recently exposed to an aspect map that looked like this: 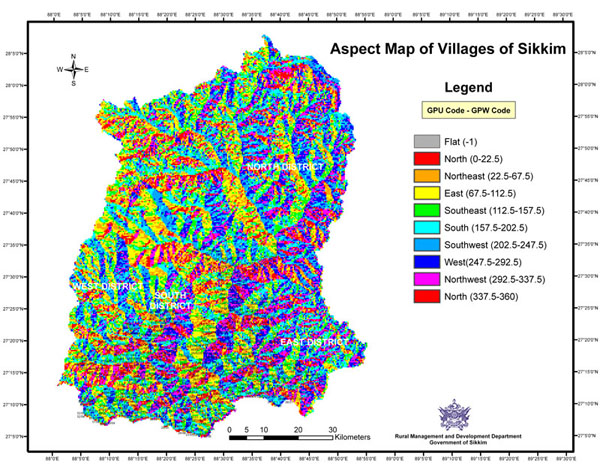 According to the color theory, blue is a cold color and red is a warm color. If I understand things right, in the Northern hemisphere, areas with the North aspect are exposed to the sun less that the ones with the South aspect. This makes me think of areas with South aspect as of "warmer" areas and ones with North orientation as of "colder" areas, so I would reverse the color schema used.

Is there any particular reason why these colors are used as a standard for aspect maps? I have browsed through many aspect maps online (link1, link2, link3) and all of them use the same color ramp I referred above.

I am really not sure why this was chosen. It appears that this particular colour ramp was decided upon as the default. I recently ran an Aspect using ArcView 3.2 (version is from +- 1999 / 2000) and was given the following in the Table of Contents. 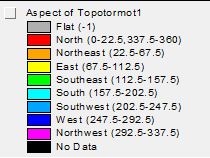 Checking the help from ArcMap 10.4 we are given the following colour wheel describing direction.

It would appear that these colours were arbitrarily chosen from ArcView 3 (possibly even before) and have since become synonymous with how we present Aspect (at least the default system colours). I am not sure how QGIS chooses its colour palette for Aspect.

Just looking over some literature, there have some interesting papers written, these are from the early 1990s discussing the topic of presenting surfaces:

I'am mot sure but it could be linked to the fact that for hill shading the light source is typically located at the north-west so the north-west facing slope are illuminated and the south-est slope are in shadow.

So the aspect map may follow the same rule even if this situation isn't an accurate representation of real illumination.

Not the answer you're looking for? Browse other questions tagged cartography mapping color-ramp aspect or ask your own question.

4
Why are ArcGIS 10.2 Color Ramps missing?
6
Creating ArcGIS color ramp to show from -X to 0 to X as Red to White to Green?
3
Color gradient to show direction in polygons (filling, color ramp, gradients)
3
How to correct aspect values in a North Pole Stereographic projection?
4
What is the difference between Aspect and Flow Direction tools?