However, when I try to get this figure I get different results depending on the map projection. For this I'm using the ne_10m_admin_0_countries, and the ne_10m_populated_places shapefiles. Along with a new layer (lets call it LDNNY) with a CRS of EPSG:4326. Finally, I've got 'on the fly' set to TRUE with a project CRS of EPSG:4326.

Step 1. Draw a straight line on LDNNY from London to New York. Using the CAD-tools's Azimuth tool I achieve an initial Azimuth of 261.7193°.

These are just some example - you can see that some are very close to the online calculator but...
Please could someone explain:

N.B. If needed I could add images to help explain better.

A map projection distorts reality. Any representation of the curved surface of the Earth in 2 dimensions will have distorsions. Which means that great circle arcs (or the more accurate geodesic lines) are not necessarily straight lines on a map projection. The shapes of the features on the map are also distorted in some way, depending on which projection you are using. Some projections are better at preserving angles, shapes, distances or areas. So different map projections give you different answers for bearings, distances, etc.

Let's look at some visuals.

Data in EPSG:4326, when displayed on GIS software, by default will resemble a Plate Carree Projection, with equidistant latitudes and longitudes. So when displayed, the world looks like this: 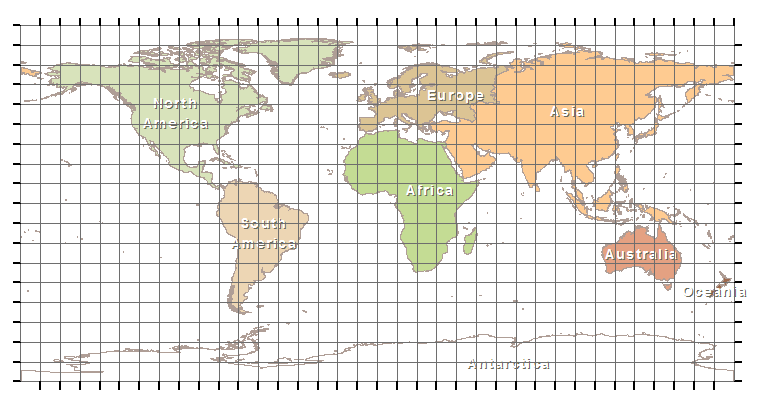 Now, if we try to draw a straight line directly between London and New York, using this map projection, we would not be drawing an great circle arc, because this projection distorts the shapes in several points, and do not preserve straight lines except for the equator and the meridians. In fact, a great circle arc displayed on this map would look like this:

This great circle appears curved on that map. So calculating bearings with a map projection is a bit trickier!

So the solution here is to use a map projection that will preserve the straight line and the angle of your line, such as an azimuthal (plane) projection centered on one of your endpoints. Then, and only then, can you densify the line, and display it in an other projection. As for the initial bearing, if you center your projection on London, it should give you the correct angle (around 288.3°).

Not the answer you're looking for? Browse other questions tagged qgis coordinate-system azimuth or ask your own question.