I'm trying to add polygon attributes to a point file with a lot (~370,000) of points in QGIS v3.0.0. I first tried using the point sampling tool, which I've used with success pulling the values from raster files, but this became unresponsive and remained so for several hours.

A search pointed me to the Saga add polygon attributes to points from the processing toolbox, and reported it to be much faster than join attributes by location see this post by @Underdark link. This completed quickly but failed to create or add a layer. I got a similar error as @Tali in this question. I followed the multipart to singlepart suggestion, but to no effect- my polygons were all initially single part features. I also ran v.build.check to see if I had any other topological errors in my polygon file, but found none.

The error message I get is: 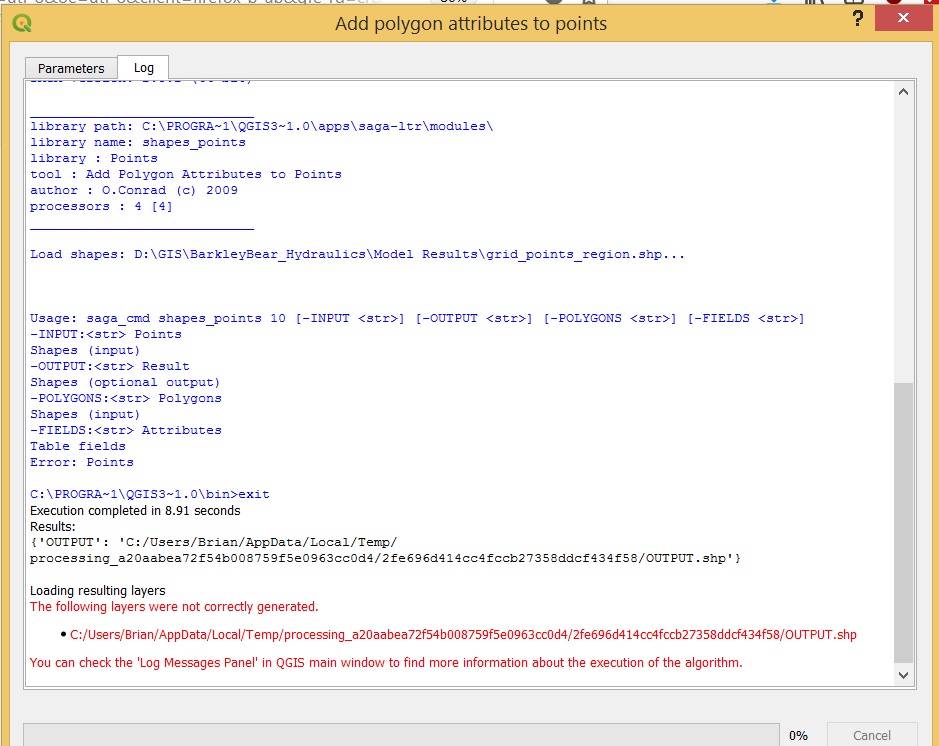 I can do other processing tasks with the point layer, and tried both in and out of edit mode. The tool works fine with the same polygon layer and a much smaller point files (~400 pts), but still failed when I used a ~200k point subset. I've tried re-running with the output set to save as both as shapefile and as geopackage, but get the same result. I converted both my point and region files to geopackages and tried again, with the same error. I also tried in a blank map document with only the two files and get the same error.

Any ideas on how to resolve the error with the add polygon attributes to points, or an alternate tool that could accomplish the same thing in a reasonable amount of time?

Browse other questions tagged qgis point saga or ask your own question.