The indices I'm working with are Vogelmann Red Edge 2, normalized difference red edge, and red edge NDVI (reNDVI). All these indices have the same format as for NDVI.

These indices are supposed to all be in the range of -1 to 1, however they are typically outside of the -1 to 1 range.

I've tried other iterations of the band math equation (e.g., altering which variables are designated "float"), but they also produce indices that are outside of the valid range.

Re-doing the indices in ENVI, most values are in the proper range. The table below is for reNDVI using (float(b1)-float(b2))/(float(b1)+float(b2)). The second column, "count" indicates there are almost 19 million pixels with a value near -0.24, with another 10 million pixels in the two bins next to it. However, a couple hundred pixels are still out of range. I'm not sure why I get this. Does this make the whole band invalid (for the index), or are these really low values to be expected from things like bad pixels? 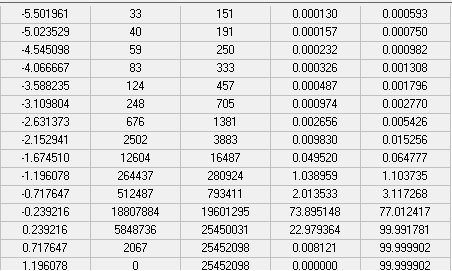 pay attention that, before spectral index, atmospheric correction must be done. it would be better if you rescaled your corrected values (surface reflectance) between 0 and 1 using below equation:

after atmospheric correction and rescaling, compute your indices.

It is likely that the bad values are actually artifacts near the edge of the image, where some spectral bands may have information while others do not. That type of error can result in various values outside of the expected range.
In order to fix that issue, you can create a mask file which requires that all bands have values within the expected range of values from your band.

Not the answer you're looking for? Browse other questions tagged remote-sensing raster-calculator envi vegetation-index hyperspectral-sensor or ask your own question.

3
How to Normalize or rescale the NDVI raster image
2
EVI and NDVI range value
1
How do you digitize an ROI in envi 5.2?
8
Landsat8 DN to TOA Reflectance (minus values)
2
Comparability of Landsats
4
Why getting wrong NDVI values resulted from scaled reflectance in ArcMap?
1
Masking cloud pixels for NDVI in QGIS
1
ArcPy: Create NDVI with Raster Calculation and Map Algebra