I have a UK 5m DTM coverage loaded into Postgis with: 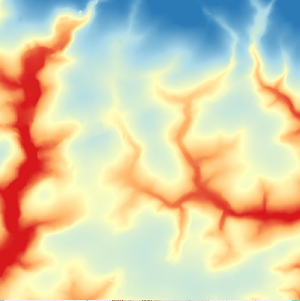 This works as expected, however when I run a query for ST_Value, such as:

I get the error:

NOTICE: Attempting to get pixel value with out of range raster coordinates: (2, 100)

If I run the same query, but using ST_NearestValue instead I get two rows back, eg,

I have checked for the points where this happens and they are always round numbers divisible by 500.

If instead I request the metadata, ie, the same query but using (ST_MetaData(rast)).* I get two rows,

It is pretty obvious that the problem is due to 100x100 tiles of pixel size 5m, resulting in edge conditions every time a coordinate being tested for intersection is divisible by 500.

I have solved the problem by rewriting the above query using max(ST_NearestValue(rast, geom)), ie,

the final parameter makes no difference, as there are no no data values in the coverage, as can be seen from the input raster.

If I run the histogram, excluding, no data, I get and add up the values:

I get 20000, ie, the sum of the pixels in both the intersected tiles that intersect the point divisible by 500.

I have seen this question, but I don't think it really answers my case.

I have a solution, using max(ST_NearestValue(rast, geom)), but this does strike me as unexpected behaviour, or I am missing something really obvious. Sadly, when I ran this on the national dataset, the value that was chosen from the two results was the low one, so I have a lot of houses whose height above sea level is -3.40282346638529e+38, when even by British standards of building in flood plans, strikes me as excesssive. I only noticed when looking at summary statistics after the fact, as my original update query swallowed the errors.

This isn't really an answer as such but I think I have experienced this bug too and have reported it here.

It could also be something in one of the underlying libraries.

I will see what else I can do to try and debug.

Not the answer you're looking for? Browse other questions tagged postgis raster or ask your own question.

3
Understanding ST_RasterToWorldCoord() in PostGIS?
2
Issues with raster data on postgresql / error:Attempting to get pixel value with out of range raster coordinates
1
Difference between PostGIS ST_Intersects vs '=', QGIS and ArcGIS 'select by location'
4
Selecting lines from first table based on bounding Box of second table in PostGIS
3
PostGIS raster query "out of range raster coordinates"
5
Clipping tiled raster with polygon using PostGIS?
4
Very slow loading of PostGIS raster layer in qGIS
2
ST_Union 'MIN' on rasters with result raster having DN values as raster table column value
1
Function st_clip(raster, integer, geometry) does not exist