I have downloaded parcel files for several counties in Washington State, and am attempting to overlay them on the OpenStreetMap Standard base layer (which is in WGS84 Pseudo Mercator). The majority of the county layers were in WGS84 and automatically loaded into the correct extent/location, but some (such as King County) were in NAD83 (ESPG: 4269) is placed over West Africa in the OSM map.

What do I need to do to get this King County layer to load in the correct place on OpenLayers map? Or alternatively, how do I convert the file to the correct CRS using ogr2ogr?

Here are my project CRS settings: 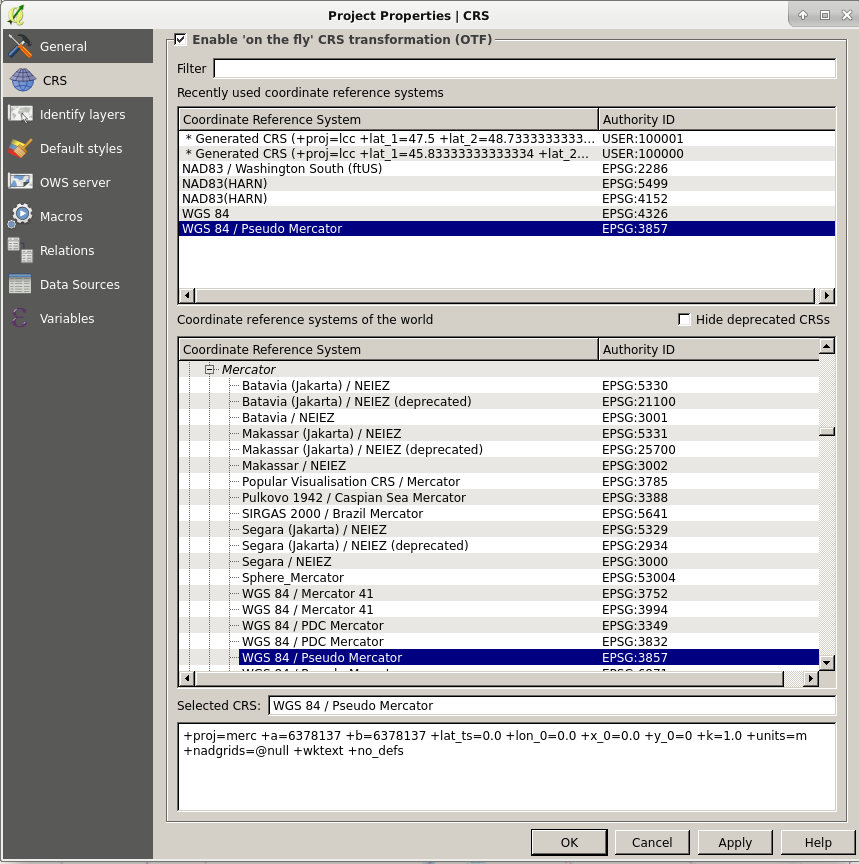 If I set the CRS for the layer to the correct settings NAD83 (EPSG:4269), the layer is not visible. (but doing zoom to layer still takes me to west Africa). If I change the CRS in layer properties to EPSG:3857, it becomes visible but is still in the wrong location. 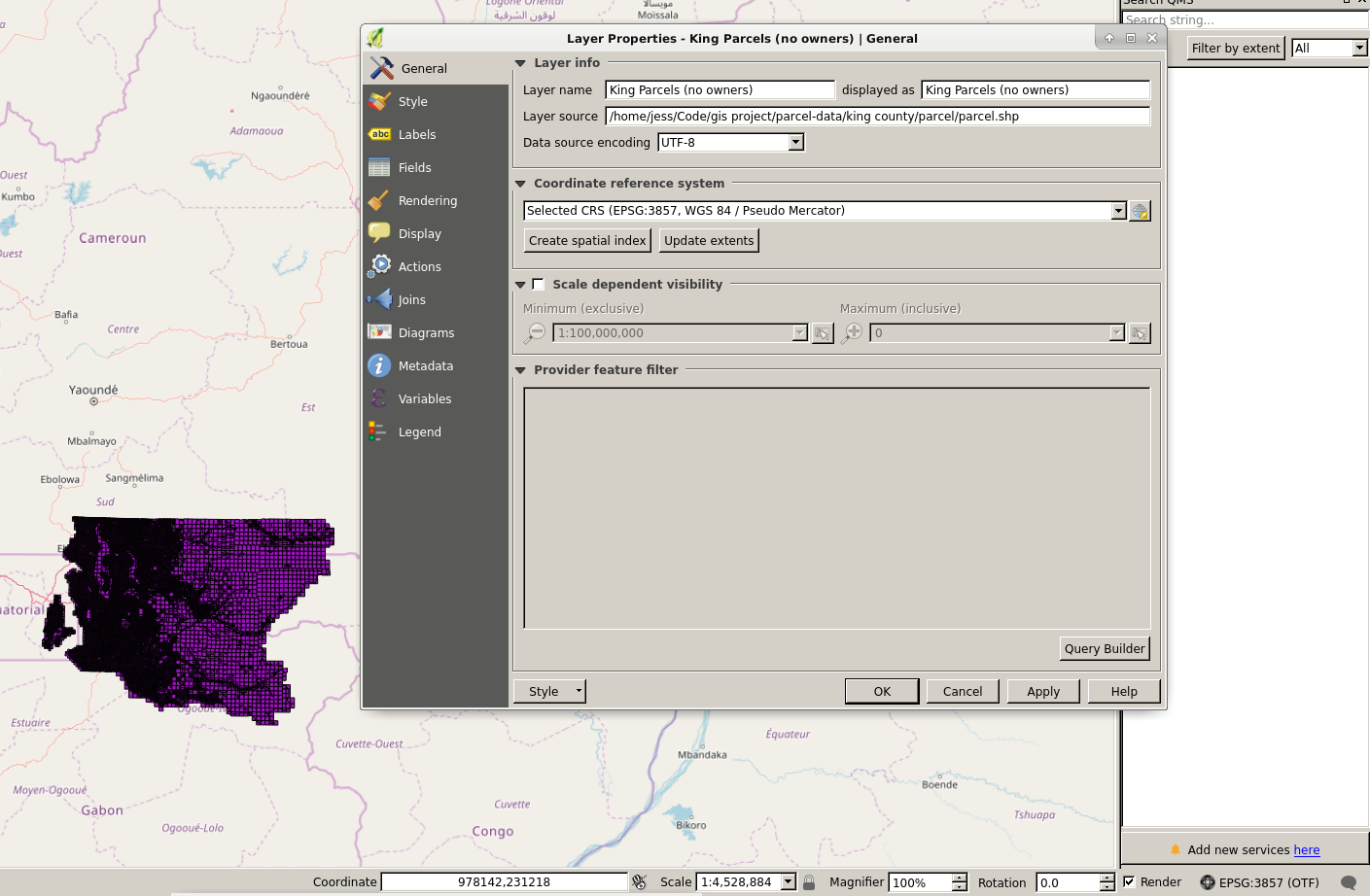 I also tried saving the King County NAD83 layer as a new file with CRS set to WGS84 PseudoMercator, and using the extents laid out in the metadata files: 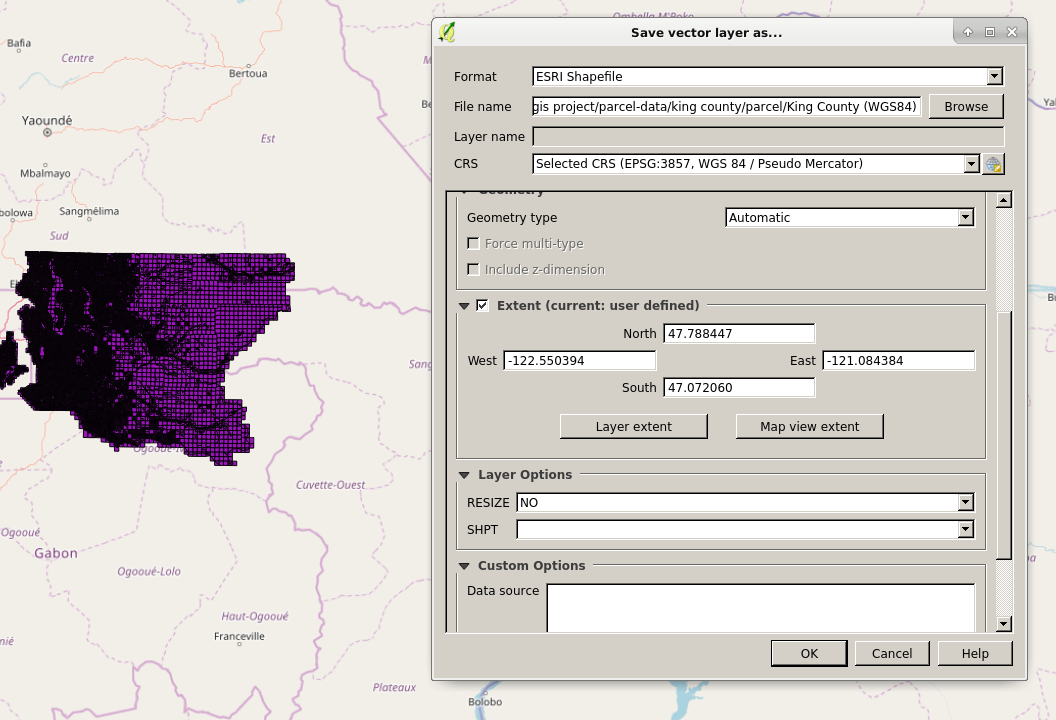 ... but when I loaded it, I can't see the layer or make it visible no matter what CRS I choose for it. So then I gave up trying to do it in QGIS, and attempted to use some command line tools to try to convert/reproject the file.

Here is the output of ogrinfo for the King County NAD83 shapefile:

I tried using ogr2ogr to convert it to WGS84, but got an error message:

... I'm at a complete loss for what to do. I've looked through tons of tutorials and GIS Stackexchange posts on projections in QGIS, and seem to be missing something, but can't figure out what.

What am I doing wrong here, and how can I make this layer work with OpenStreetMap, and the other WGS84 layers?

The CRS of the King County parcel.shp is NOT NAD83. You see it from the extent which is obviously not degrees (what NAD83 uses), but meters or feet.

It seems that ogrinfo knows which CRS the shapefile has (State Plane Washington North feet), so you better leave it that way. EPSG code would be EPSG:2926.

The shapefile should import into QGIS correctly when EPSG:2926 is set to the layer. Once done, you can reproject it to a different filenmane and any other CRS based on NAD83, WGS84 or any GCS.

Not the answer you're looking for? Browse other questions tagged qgis coordinate-system ogr2ogr wgs84 nad83 or ask your own question.