Surprisingly, it turned out to be "arcpy.GetParameterAsText()".

To prove it to myself I changed the script file in the Source tab of the Tool Parameters Window to the following simplified script:

After it runs I check the location of the Target Feature Class and sure enough it is gone.

It seems that if a feature class data type parameter defined as output: 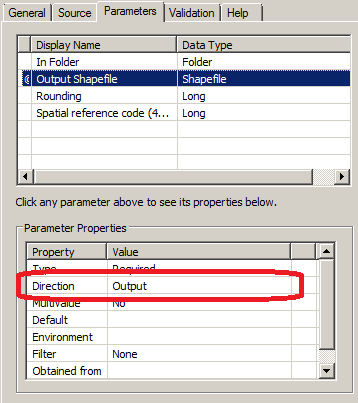 Then running the tool from ArcCatalog toolbox and (to my surprise) the nominated existing shapefile was removed.. this could be a real gotcha, if the user has specified an parameter as output intending to append or modify they may be quite upset that the tool deletes what is already in there before their code is reached.

Not the answer you're looking for? Browse other questions tagged arcpy arcgis-10.2 python-script-tool or ask your own question.

0
Error 000732 - Input Layer “does not exist or is not supported” when using 'ApplySymbologyFromLayer_management'
-1
Why is Python Script (using XYTabletoPoint) Deleting target Feature Class?