I am trying to use the advanced digitizing panel with a new line geometry layer. I am using QGIS 3.0.3

BTW, I have searched the QGIS documentation, and there does not seem to be any reference to "geographic coordinate systems" or any instructions regarding them.

qgis coordinate-system
Share
Improve this question
edited May 28 '18 at 18:04

To set the project coordinate system you should go to : Project > Project Properties... (or do Ctrl+Shift+P) and select the CRS tab (CRS stand for Coordinate Reference System) there you can choose between most of the different coordinate system (Geographic or Projected).

If you are not familiar with the difference between Geographic or Projected you should read this (from the qgis help), and you may want to ask another question about witch coordinate system is the most appropriate for your aim (dont forget to specify the location and the intended use of your data)

J.R's answer made the difference and I am now using the Advanced Digitizing Panel as I wanted. I am adding some more information that I learned along the way.

The Advanced Digitizing Panel only works when the Coordinate Reference System (CRS) being used by the project is a PROJECTED rather than a GEOGRAPHIC CRS. The reason for this is that advanced digitizing uses linear units of measure, such as feet or meters, which is more compatible with a projected, than with a geographic, CRS.

Advanced digitization uses linear measures of distance and thus translates easily into the coordinates of a planar projection, whereas using linear measurements on a spherical surface is much more computationally difficult (trig!) and less intuitive. Even the angles used in advanced digitizing are planar, and are incompatible with angles on the surface of a sphere. For instance, the interior angles of a planar triangle sum to 180 degrees - but this is not true for a triangle on a spherical surface.

Because it is simpler, more intuitive, and probably actually what is wanted, advanced digitization is confined to projected (planar) CRSs and is not supported for geometric (spherical) CRSs.

How do you configure QGIS for a projected CRS, rather than a geometric CRS? The Project -> Project Properties -> CRS dialog is used to select a CRS for the project. The default QGIS CRS for a new project seems to be "WGS 84" which is a geometric CRS and advanced digitization will not work with it. The "Coordinate reference systems of the world" table in this dialog is a catalog of CRS's, many of which are projected rather than geometric. If you know which is which, you can select an appropriate projected CRS for your project. I do not know how to distinguish them.

This is how you can pick PROJECTED system for your project. 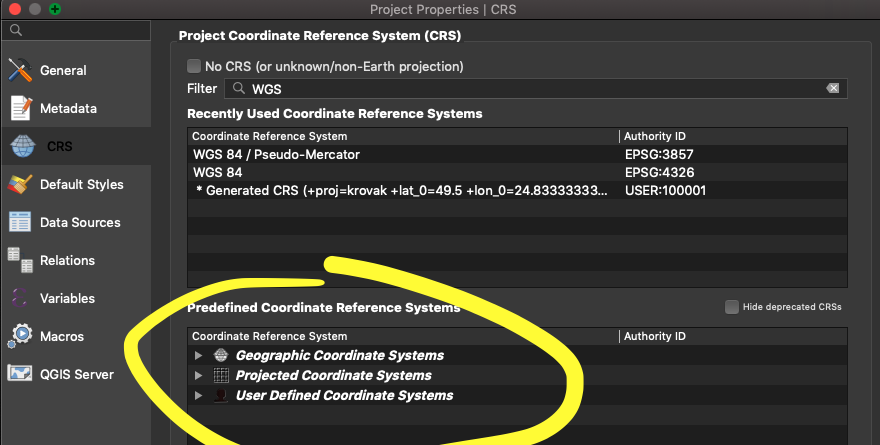 250
Difference between projection and datum?
8
CAD tools are not enabled for the current map tool
2
QGIS3 shows coordinate in geographic coordinates though QGIS project and layer are both in projected CRS