I'm trying to georeference this map, but I don't recognise the CRS. It is for a region of Tanzania. Here is the image on imgur in case Stack Exchange compresses the image. 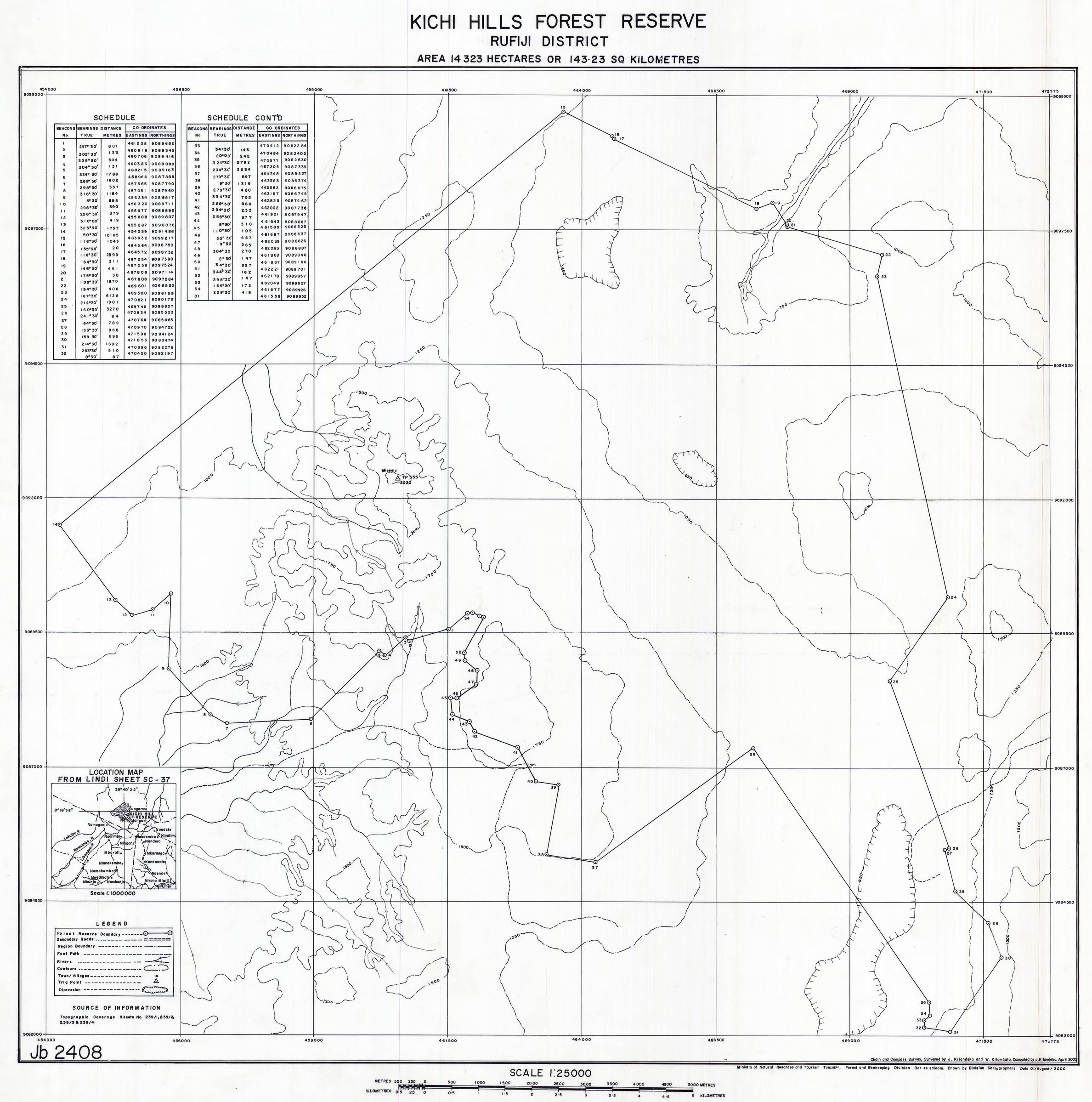 How would I go about IDing this myself in the future?

The question asks how to go about identifying coordinate systems in the future. In that spirit, rather than just providing an answer, I will lay out the thought process leading to an answer. (In general there are many more considerations than listed here, especially considerations of the shape of the graticule and its orientation. But in this case such considerations are not much help.)

At such a large scale (1:25000) near the equator (around 8 degrees north) it is very hard to tell one coordinate system from another. However, there are some clues:

These considerations immediately suggest the coordinates are UTM. To check, we can make a conversion using (say) an online UTM converter. (Be careful! This is the fifth one I tried before I could get any reasonable results for the southern hemisphere.) The (lat, lon) of the central point converts to (463965, 9085040) in southern zone 37. We're on to something here: the easting is as close as we could hope. But the northing is about 7000 meters too low, which corresponds to 7000/10000000 * 90 = 0.063 degrees = about 4 minutes. (This uses the NAD 83 datum; NAD 27 is not applicable to this part of the world.)

This is as far as basic knowledge can take us. The result strongly indicates the coordinates are based on UTM, but one or more of the following has occurred:

One way to check whether the coordinates really are UTM is to obtain a base layer in which some of this map's features are clearly and accurately shown; reference this map to UTM; and overlay them. If they coincide to within the errors expected of the inherent layer scales, then we can trust the coordinates are UTM. Otherwise, they are likely just a north-south shift from UTM, but further research into Tanzanian coordinate systems would be advisable, as suggested in the answer by @geographika.

The image refers to map sheet SC-37, which you can seen in the index map: http://www.omnimap.com/cgi/graphic.pl?images/ind-for/tanz-50s.jpg

Further details on the maps at http://www.omnimap.com/catalog/int/tanztopo.htm

It mentions Transverse Mercator but no CRS.

I don't see any direct information about it in the text.

You could use trial and error with CRS' in use in Tanzania, comparing coordinates on the map with the calculated ones.

For a possibly quicker and more accurate result, contact the authors listed on the bottom of the map.

Not the answer you're looking for? Browse other questions tagged coordinate-system tanzania or ask your own question.