What does M-value represent?

I am trying to wrap my ahead around the meaning of the M-value. I read ESRI's dictionary definition here: https://support.esri.com/en/other-resources/gis-dictionary/term/m-value

and was not able to get a good grasp of the concept.

What does the M-Value in GIS data represent and can you provide an example of using it or how its useful?

It is a measured distance along a route. A mile marker along a highway that is nominally 10.1 miles from some start (such as where the route crosses into a county) may not be exactly 10.1 miles. Someone surveys where certain landmarks, mile markers, or buildings are along the route exactly. These route events get an M value representing their measured location. A route feature has both its line and its measured locations, and other events, along it. A measured distance along a line has many uses, such as route planning.

Measured distance points can also be used to improve linear referencing. Some points that have been located exactly can be given higher weight, so that they have more influence on where new geocoded points are placed along a line. This is very important on long lonesome stretches of highway where there is not much to geocode from.

For what I have understood, the M-value is made to store a measured (m) value for each vertex of any geometry: line or polygon or point.

Other reference that explain the use of Z and M coordinate in GIS is the link below: https://developers.sap.com/tutorials/hana-spatial-intro5-z-m-coordinates.html 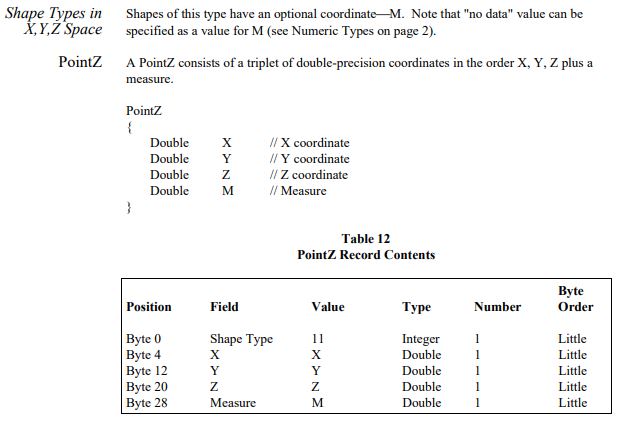 Not the answer you're looking for? Browse other questions tagged gis-principle terminology m-values or ask your own question.