How to get the exact Circle that user has drawn using Leaflet.draw.Circle?

I have a simple Leaflet map, where The user can draw a Circle, using Leaflet.Draw.

When you use the following code to get the geometry,

You get only the center Point. This issue on Github says that it is expected behavior. The issue says that you can also get the Radius, and build the Geometry yourself.

I tried to do that using Turf, using

The problem is that the circle created, is different from the Geometry shown on the Leaflet Map. (note the Road intersection on the South-East Side of the circle)

Circle on Screen where user is drawing:

Circle, which is result of Turf buffer: 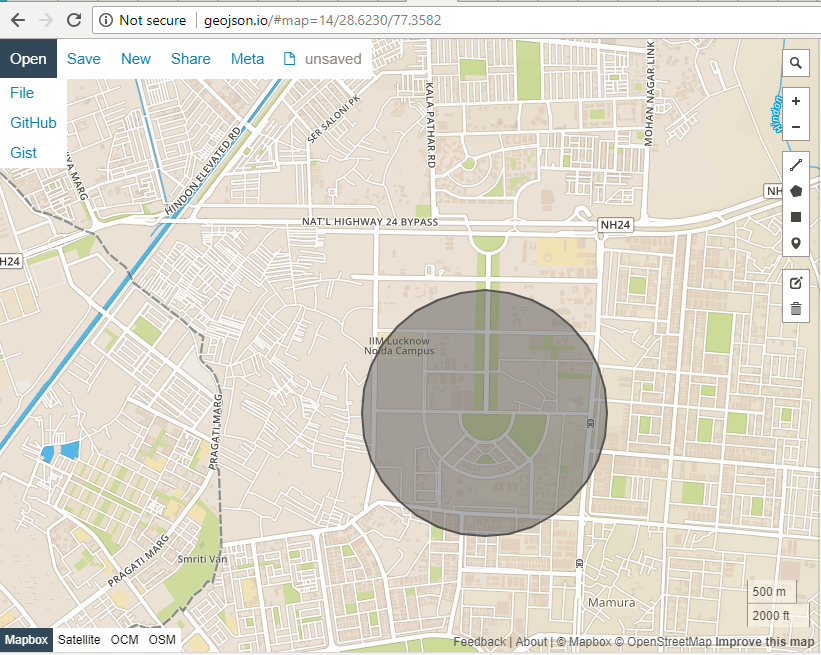 I guess this is due to the radius being in Web Mercator in leaflt-draw.

I would like to get the circle coordinates that the user has actually drawn. How can I get those?

Here is a complete page, showing Turf Circle and Turf Buffer, the buffer shows an issue. Note the circle has steps (Vertices). I'm guessing as there isn't a real GeoJSON circle in the standard.

I get the code a little different as GeoJSON standard does not include circles.

Now I have the center point and radius to draw a circle in leaflet or using Turf.

If you going to use the circle to see if points from another layer are inside it, this may help, it does not use turf.

Example from a click & distance instead of a draw, same concept.

Not the answer you're looking for? Browse other questions tagged leaflet circle leaflet-draw turf or ask your own question.

2
Adding comments using leaflet draw
1
How to display radius while adding element in ArcObject?
3
Is it possible to use Leaflet.draw on a map in R?
5
Leaflet.draw: add attributes and save to file
1
Spatial Queries in Leaflet, select polygons from (A1,A2…An) which intersect with polygon (B)
2
React-Leaflet-Draw: accessing a polygon's array of coordinates on save
1
Circle display on openlayers map (client-side vs server-side)
1
Leaflet: get layer in GeoJSON with pixel coordinates instead of lat long coordinates
0
Turf intersect point with Leaflet GeoJSON error