Cannot find polygons that are inside a big polygon using GeoPandas

First of all, some info about my system characteristics:

I am working on a program, where I filter out the data of two shapefiles -link with data- (each shapefile is a vector layer with polygons) and organize it according some statements. The two shapefiles look like the picture below, the picture is just a small part of the whole map. 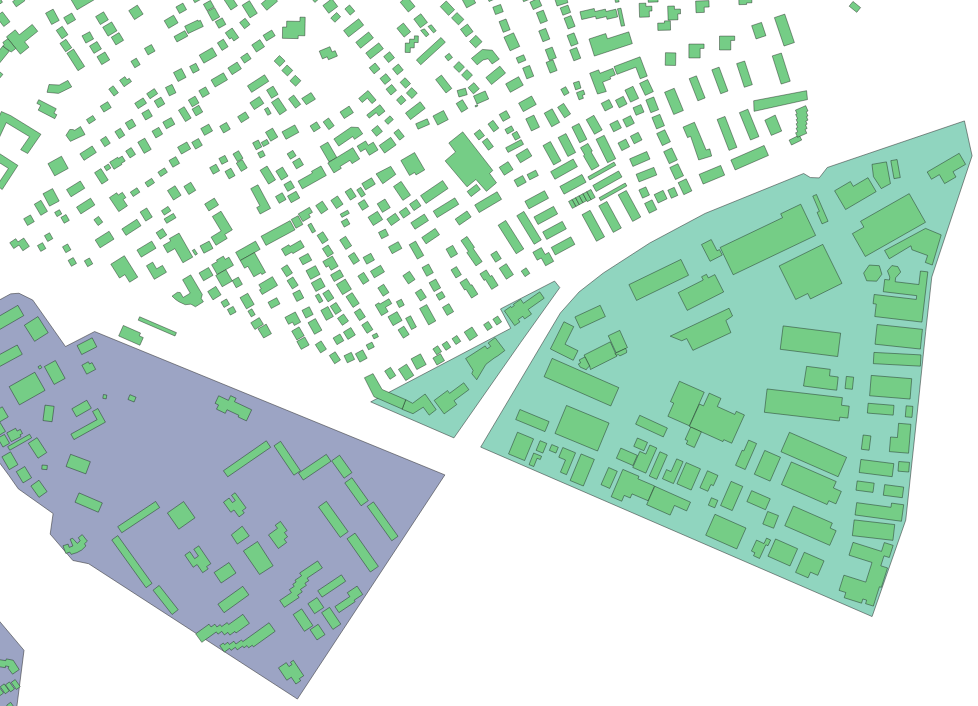 After doing some filtering, I need to find in the remaining data those polygons inside the big polygons (in the picture the purple and the green polygon) and change some information if there is an intersection. I have tried using some of the GeoPandas functions for this task, but the results are not the ones that I expected.

Here the work is well done, but the function returns me another shapefile and it takes a lot computing time if a use the hole data in the shapefiles.

I would prefer a boolean series, because I just need to change some information in the shapefile if there is an intersection. The idea is something like this (the code below is a matter illustration from my idea):

How can I do that or have a better idea that achieves the result that I expect?

This adds a new column to the b dataframe with the land use class in which each building is located.

Some additional notes about your attempts:

Try 1: a overlay can be suited here if you want to create a new geometry (e.g. in the case where a building is only partly inside a big land use polygon, then overlay will actually clip the original builing's geometry). But if you don't want to edit the geometries (take the intersection), the the spatial join (sjoin) shown above is more appropriate.
It is true that overlay is currently very show, as you noticed. There is work underway to improve that in the next version of geopandas: https://github.com/geopandas/geopandas/pull/429.

Try 2: this should also work, and actually for me it does not give a full series of False values. For the exact example you gave (inter = b.within(la.loc[0, 'geometry'])), I get 18 True values (from inter.sum()). However, this is actually equivalent to the spatial join, apart from that the spatial join does this automatically for all elements of the land use dataset.

Not the answer you're looking for? Browse other questions tagged polygon python-2.7 geopandas or ask your own question.

1
Intersect between polygonal shapefiles error
3
Get the outer ring inner ring for a given polygon using ogr python binding
3
Find small polygons inside big polygons
5
Geopandas: counting the number of raster pixels within a shapefile polygon
3
Python shapely difference between two polygons
1
Using QGIS to find and calculate parts of polylines within polygon?
2
Find the number of sides that intersect between two or more polygons
14
How do I write a GeoPandas dataframe into a single file (preferably JSON or GeoPackage)?
2
Length of intersections from a linestring and a grid shapefile by using Python GeoPandas & QGIS
0
How to drop rows from a GeoPandas dataframe that are raising errors, in this case: TopologyException, Ring Self-intersection